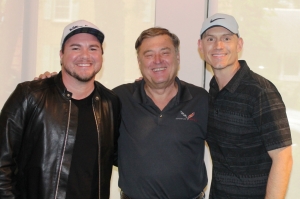 This week, Lon’s co-hosts are Mike Eli (lead singer) & Jon Jones (bass) from the Eli Young Band. They explained why the whole band wasn’t here: “We all live in Texas. Flying up to Nashville to do a little work, sometimes we split off. Everyone knows we’re a band by now.”

In fact, they said they even gave some advice on that subject to Justin Moore: “He came to us and said, ‘I’m thinking of moving back to Arkansas. How does that work with you? Can you make it work?’ I said ‘Heck yeah, flights are easy coming to and from Nashville.’ Next I know, folks at the label were griping about me convincing him to move to Arkansas.”

With it being Mother’s Day weekend, Lon talked with Mike & Jon about their kids. Mike has a 9 month old son. “Boys are different. This is an eye-opening experience. He’s all over everything. He’s trying to walk, taking steps between couches and chairs. Our house isn’t all that baby-friendly, so I wasn’t ready for him being this mobile already.” Jon added, “It’s funny, 3 out of the 4 of us each have a boy & a girl. Chris has one girl. But we have 7 kids among us aged 6 and under.”

Mike Eli remembers seeing Maren Morris singing in Texas many years ago: “She did some open mic nights when she was 12, and she could sing her butt off then. She was putting out independent record when she was around 13. She’s been at this for a long time. She deserves every bit of success she’s having. She’s just a good ol’ girl from Texas.”

Jon remembered seeing Chris Young ten years ago “We played a show together in Houston when he was on his way to his first #1. It’s cool to see that he just celebrated his 11th #1.” Mike added, “Everyone thinks we should do a tour together: The Eli Young Band, Chris Young, and Brett Young. Since we’re all related. I’m sure someone smarter than us will come up with the name.”