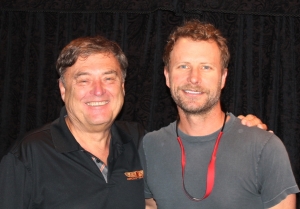 This week Dierks Bentley co-hosts the countdown. It’s his first interview since hosting his Seven Peaks Festival in Colorado. He talks about the artists at the Festival, his 3 CMA nominations, and the real story of how he received a ticket for fishing without a license in Colorado.

One of the artists at Seven Peaks this year was Luke Bryan. When he was Lon’s co-host, Luke said he hoped to go trout fishing before his show. Dierks told Lon that Luke in fact caught a rainbow trout, and announced it to his audience that night. He also said, according to Dierks, “I wasn’t expecting to catch anything so I didn’t have my license on me.”

The next day, Dierks went fishing and caught a bunch. He told Lon, “Of course, I posted it on Instagram. So the next day I’m walking through town, I see a guy in a Wildlife Management truck, and he calls out, ‘Where do you want to do it?’ I asked ‘What do you mean?’ ‘You caught four rainbow, right? Do you have a license? So where do you wanna do it?’ So we went around the corner, and I paid my fine.” Dierks posted a picture of him paying the fine, and it’s below. 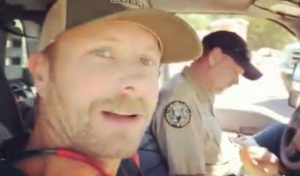 Dierks also gave Lon the true story behind his broken wrist. A few months ago, it was reported that Dierks broke a few bones in his hand while riding a mountain bike. Dierks told Lon he said that out of convenience. “What really happened, I was at the skateboard park with my 5 year old and 8 year old. I got into skate pool, slipped, and broke my hand. It was a dad injury. It was so complicated, it was easier to say it was a mountain bike accident. But the hand is good, I’m back to normal, so that’s the true story.”

You can see his 5 year old son in the video for Living. But Dierks told Lon that Knox has become part of Dierks’ pre-show for his fan club: “He’s getting more focused on the way I sing. He used to sing ‘Somewhere On a Beach.’ But now he just dances the whole time. He’s like my Kix Brooks. He provides all the energy, and I just sit there and sing. He’s getting more involved in the show.”