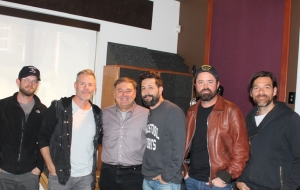 This week’s co-hosts are the members of the CMA Group of the Year: Old Dominion. Lon speaks with them about their win, and their experiences on awards night.

“When you’re voted on by your peers, that’s something that’s no so obvious, so it does feel good that we get that recognition. When we cracked the door open, we feel we have a good shot. When they start announcing the nominees is when we start to panic.”

The band had a chance to speak with a number of other artists backstage: “We saw Blake Shelton after we won the award, and it’s always weird because he’s such a huge star and was before we came on the scene. He saw us and stopped us and told us we were his favorite artist. He said, ‘I don’t mean band, I mean my favorite artist hands down,’ and it’s still weird when things like that happen.” 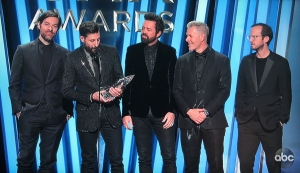 Matthew Ramsey had this experience: “I brought my daughter, and Trevor did too, it was their first time being at anything like this, and Lil Nas X walked into the room, and they freaked out. So we like walked up and asked, ‘Can you take a picture with our kid?'”

The guys will be playing Luke Bryan’s Crash My Playa in January: “We’re going to be in Hawaii first, then Mexico. But to balance it out, we start out in Hawaii and Mexico, then we spend February in Canada. So that’s the ying to the yang. Then in March, we’re all sick.”

After that, they play stadiums with Kenny Chesney on his Chillaxification Tour: “We’re excited. That’s the best tour there is, it’s the one everybody wants to be on. We got to do it three times, and now we’re getting ready to do it a fourth. It’s a big family at this point, it’s fun. Plus the lineup is crazy with Florida Georgia Line also on there, that’s gonna be big.”

They just released their third album. Lon asked about the cover photo, with all five sitting on a coach: “It’s was truly a spontaneous accidental thing. We had just spent an ungodly amount of money on a photo shoot for the cover, and we hated it. We were backstage at this show in California, and we were going to record a backstage video. It was a weird quirky dressing room, so we sat on the coach and our tour photographer snapped 3 shots, and it was perfect. We bought the coach and the painting, and we’re traveling on the road with it now.”