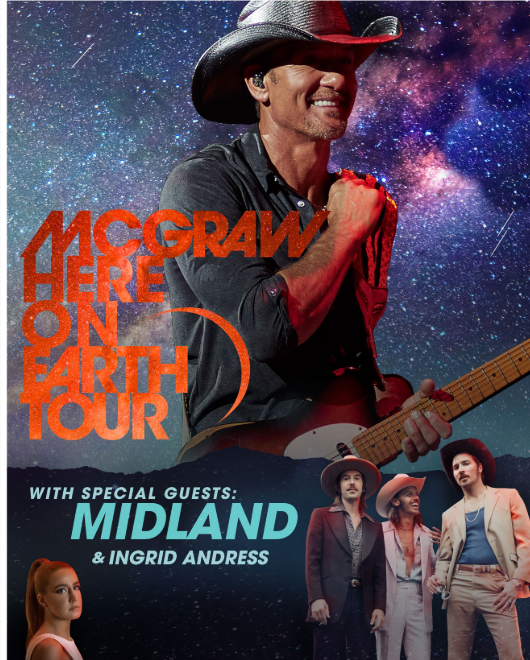 January 13, 2020 – Tim McGraw started the year off right with a headline show at the College Football Playoff Game, performing his new song “Way Down” from a forthcoming album later this year & his Nielsen BDS certified ‘Most Played Radio Song of the Decade’ hit “Something Like That,” and simultaneously announced the major HERE ON EARTH TOUR for 2020. McGraw will join forces with reigning CMA Vocalist of the Year Luke Combs for two can’t-miss summer stadium shows in Philadelphia and Los Angeles. Special guest Midland will join the entire tour, and Ingrid Andress will open the show on all dates. Produced by Live Nation, the tour will cross the country beginning in July and ending in September and will be part of Live Nation’s Megaticket program. Fans can first purchase tickets beginning Jan. 24th for select cities as part of Live Nation’s Country Megaticket at www.Megaticket.com. To be a part of future pre-sales, fans are encouraged to go to www.timmcgraw.com and become a part of MCGRAWONE. Pre-sale access for the Los Angeles and Philadelphia stadium shows will also be available for Luke Comb’s fan club group The Bootleggers.
Read more »