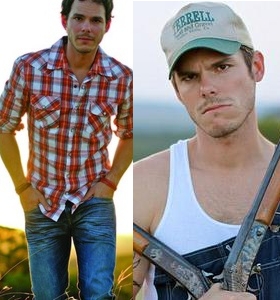 Most of the time, Granger Smith is a mild-mannered, soft-spoken Texan, a polite father of three.  But get him on stage, and at some point, an entirely new character will emerge.  Granger talked about his alter-ego Earl Dibbles Jr. with Country Countdown USA’s Lon Helton:

“Earl started as a promotional tool.  My brother & I were making YouTube videos.  The goal was to get a million views. Try to come up with something that would go viral.  Earl was a voice, I hadn’t used that voice for years.  It represents a mixture of some family members and friends.  I went to my parent’s house, went to the closet, found some overalls I wore in high school football, some boots, a trucker cap, we drew some tattoos on me, literally no thought to any of this, besides I’ll adlib a day in the life of this country boy.  So I started at the beginning: ‘I wake up, put a good dip in, crack a cold one, get dressed, start the day.’ We threw it together, put it on YouTube, and it got a million views.  Then I thought Earl needs a song.  So I wrote a song called The Country Boy Song, that was his day put to music.  That song we released as a music video, went twice as viral.  At that point, I thought Earl needs to be part of the show.  We have not looked back since that day.”

Where’d the name come from? “As my brother and I were driving in my truck, my brother says, ‘By the way this guy’s gonna be called Earl Dibbles Jr.’ Where’d you get that? ‘I went to school with a guy named Dibbles, and I think Earl’s a great first name, and if he’s gonna be country, he’s got to be Junior.’  I said, ‘Sounds good to me.’  And Earl was born.”

Explain the Yee Yee Nation: “In this original Earl video, where we were acting the daily life of this country boy, Tyler, my brother was shouting, ‘Shoot the shotgun, raise it above your head, hold it above your head and yell Yee Yee.’  So I did it, and that little bit got so much reception from fans, we started seeing people coming to shows that said Yee Yee.  One day we saw a truck dealership with flags on every truck that said Yee Yee.  So at that point, we trademarked it, created the logo, and created shirts, and it was the revolution. Here I am now, wearing this hat that says Yee Yee.”

The original Earl Dibbles Jr. video is now five years old, and has over 5 million views.  Here it is: