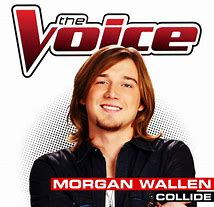 Morgan Wallen has a big hit now with Florida Georgia Line called “Up Down.”  But just four years ago, he was a contestant on The Voice!  He talked about it with Country Countdown USA’s Lon Helton:

How did that come about? “My mom signed me up for that, and that was the first thing I did with music. She told me after the fact.  Mom’s the reason I’m sitting here today.”

Blake Shelton is a coach on The Voice, and when he was Lon’s co-host, he recorded a message for Morgan: “Morgan, this is Blake Shelton. Sorry I didn’t pick you for my team. Or you didn’t pick me, I don’t remember how it went down. But congratulations to you buddy, you’re actually giving us some credibility on the show.”

Morgan responded: “To be fair, when I went on that show, he didn’t have any spots open on his team, so he had no chance to pick me, and so he probably wasn’t paying attention.  The only teams with open slots were Usher and Shakira.  Usher took me, and later I was stolen by Team Adam.”

What did you sing on the show? “I sang a pop song called ‘Collide.’ They kind of pick your songs for you at the beginning.  I wanted to sing country, they wanted me to sing pop.  That’s just how it goes. I’m super grateful for my time there.  I would not have met the people I know now. That’s a part of my journey. It was a huge stepping stone for me. I met some people who introduced me to Nashville. Because of that I’m super grateful. I just needed something to get me into the industry. That just happened to be my way.”

How far did you get? “I made Top 20. When I made it there, I got a list of songs to choose from. An FGL song was the only country song on the list, so I sang their song and got kicked off!” What song? “‘Stay.'” Tyler said, “How ironic, it should have been called ‘Gone.’ You sang ‘Stay’ and they made you leave!” Morgan said, “It shows you how thigs come full circle. Now I have a song with them. But I’m a Blake fan.” BK said, “If Blake has a spot on his tour, he can take him out.”