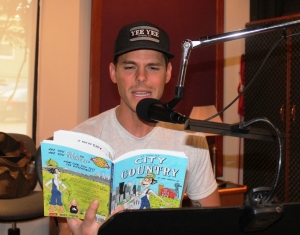 Granger Smith’s alter ego, Earl Dibble Jr., is now a published author.  His book, “If You’re City, If You’re Country,” was released this week. We spoke with Granger & Earl about the new book.

Granger said, “I created Earl a handful of years ago, it was just a promotional thing, me & my brother having fun, and then it goes viral. As it grew, it became more fun. We’ve loved every step of this journey for Earl Dibbles.”

We asked Earl, how did you write this book? “I’ve never seen no computer in my life! I’ve never messed with no keyboard. So I just get in the woods, I get on the woods, and get on the ground, and I get a little stick, I clear out the leaves, and I write it there in the dirt! Once I get it in the dirt, I call someone over, and say ‘There’s the book,’ and they do what they gotta do. I think it’s a good book, a self-help book to make sure everybody knows ‘Are You City Or Are You Country,’ and I don’t like these city folks one bit!”

Granger’s new single is called “You’re In It”: “The song is such a good feeling song. That’s what this one is to us. We don’t have to create a story about it. It tells its own story. That’s what I love about the single. The video is a story we wrote about a guy going through hard luck. He’s about to lose his farm. He’s talking to his wife about. He becomes desperate, desperate enough to join a group of guys who are going to rob a bank. As he’s in the midst of the robbery, he realizes nothing is more important than his wife.  He realizes he’d rather lose the farm than lose his wife.”