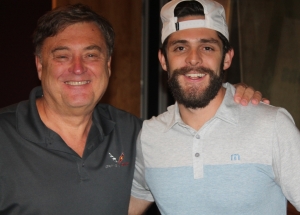 Thomas Rhett is definitely an expert when it comes to “life changes.” He told Country Countdown USA’s Lon Helton: “If you know me, you know what that song is all about. I think I was venting about what was happening in my life at that time. We were in the process of adopting Willa Gray, and Lauren was in Uganda for four months straight. It was utter chaos. We thought we should write a song about it. I thought it was too personal. I’ve never heard the word ‘Uganda’ on country radio before, which is special to me.”

Now, amazingly, the kids who inspired that song are growing up. Thomas’ daughter Ada James just had her first birthday a couple weeks ago. “Unfortunately, I had to go to Canada that day, but we celebrated Ada’s birthday the day before, and then celebrated again the day after. Willa Gray will turn 3 in November. She acts like she’s 10. She has more personality than I will ever have. She can brighten a room.”

Thomas is good friends with Tyler Hubbard of Florida Georgia Line, and they both talk about how each of their lives have changed: “Tyler & his wife Hayley were at my house just last night.  We talk about this all the time, because the dynamic of being a parent & an artist is really not normal. You go through being an artist, going on stage, you have your routine, you have a cocktail, hang with your band, and play a show. That’s normal to me. But it’s so different now because I bring my kids on the road, and Tyler brings his daughter on the road. Now at 7PM, you’re putting to babies to bed, then your tour manager says ‘You play in ten minutes,’ and I’m not in the zone for this, I just put my kids to sleep. So it’s been a huge shift in both of our brains because you want to perform at a high level, but still keep the ‘dad-ness’ of yourself still going.”

Thomas told Lon he’s been trying to collaborate with Kane Brown: “We have sent each other 5 or 6 songs, trying to get each other to sing on it. We haven’t found the right song yet. I have hopes we will find one. He’s about to put out a record that’s amazing, and just hoping I can send him one he likes, and maybe try to get on there.”

Thomas played golf with Lady Antebellum’s Charles Kelley: “Me & Charles were playing against Niall Horan [formerly of One Direction] and his tour manager. This was the first time I played golf in a long time. I ended up parring the first four holes and I had a birdie on 18 and we beat Niall by five stokes, and they were so mad. But it was literally the best golf I’ve played in my life.”

Thomas just wrapped up playing some stadium shows with Kenny Chesney. A few weeks ago, Kenny told Lon that he takes an ice bath before each concert, and he made Thomas do it as well. Thomas told Lon about the experience: “He told me to get down to my neck. When I did, I thought I was going to die. I stayed for 3 minutes. Then my wife got in, and stayed in for 8 minutes. My wife can do it longer than me. It’s amazing how good you feel when you get out.”