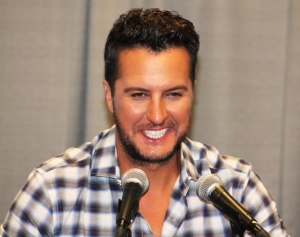 Earlier this week, Luke Bryan hosted the announcements of the CMA Awards Nominees at his new restaurant in downtown Nashville. Luke was nominated once again for Entertainer of the Year, an award he’s won twice. The 52nd CMA Awards will take place on Wednesday November 14.

Luke talked with Lon Helton about his new restaurant, 32 Bridge Food & Drink: “It’s been ten times more fun than I thought it would be. I’ve always been a foodie. I love my southern flair, but I also love sushi, so we have a sushi bar. I also have elk burgers. I go elk hunting every year, and typically I’ll get an elk, and they’ll send me 200 pounds of elk meat. So that was something I put on the menu.”

Luke told Lon he’s been hanging out with “the other Luke,” Luke Combs. The two went hunting together last spring: “The gods of hunting shined their light on the two Lukes crawling through the grass.” Did he pitch you songs? “He did! He pitched me songs! You always love that as an artist. It’s fun to be able to text back and forth and make that happen.”

This year will mark the 10th anniversary of Luke’s Farm Tour. “We love it. When we’re out there in a field, we know it’s the biggest thing happening in that town. Ten year’s of Farm Tour, it’s flown by. I’ve got Chace Rice joining me this year. We’re going to Ohio for the first time.” It goes for two weeks at the end of September.

Lon got the latest on Luke’s boys Bo & Tate: “It’s Bo, Tate & Til, my nephew. He’s 16, which means he’s driving. We’ve already had some moments with that. Don’t get me started on that. Bo is 10 years old, he’s my mini-me. He wants to hunt, fish, and go golfing. Tate just turned 8, and we had a big birthday party for Tate. I put pictures of the slip & slide on my Instagram page.”

Work on Season 2 of American Idol hasn’t really begun yet. But Luke was still glowing about his first season: “I loved every second of being on Idol. Watching these kids, judging gets tricky, it tests your brain. I think I impressed people that I didn’t get in too much trouble. The chemistry with the other judges started to get better. We realized we could poke at each other. That’s what makes TV fun. We can be serious one minute, and total goofballs the next. To be able to have Season 2, we’ll be better judges, and the magic will be there.”

Luke talked about his friend Jason Aldean. He told Lon, “I still have my gift for his son, and now I see I’ll have to get a girl’s gift. I may have to leave that to [my wife] Caroline. I don’t know how to shop for girls. Then I read that Jason’s selling his house.” Lon brought up that Jason’s house had a bowling alley, and now he’s selling it. “I know and Jason give me grief because I have my own bass lake.He’s got a bowling alley! He said, ‘When I get my new house, I’m gonna get another bowling alley.’ He’s found another piece of property closer to town.”
Luke also has great stories this week about Jon Pardi, Darius Rucker, Carly Pearce, Morgan Wallen, and Florida Georgia Line.