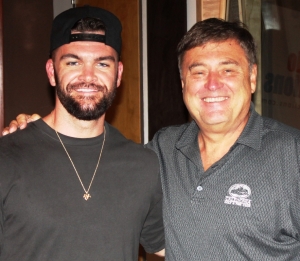 This week, we have a first-time co-host, Dylan Scott in the studio with Lon Helton. He told Lon how his Top 5 hit “Hooked” came to him: “I didn’t write this song, but some buddies of mine wrote it, and emailed it to me randomly. I was driving with my wife, I played it for her, and when it ended, she said ‘You’ve got to record this song.’ So I did, and it came out good.”

Did they have you in mind for this song? “Part of the backstory about this song is it was partly written by Morgan Evans, who is married to Kelsea Ballerini, and it was written while Peter Pan was in the chart. It’s cool they wrote it, and they sent it to me, and Morgan was cool with me singing it.”

Dylan told Lon he’s a huge fan of 90s country, and that includes Garth Brooks: “I remember the first time I saw Garth was here in Nashville and man, you talk about inspiring, seeing Garth Brooks on a stage, it just fueled my fire, it made me want to be a better artist. He’s got something I’ve never seen in any artist before.”

Last December, Dylan & his wife became parents of a son, Beckett. Lon asked where the name came from: “That’s all my wife. I honestly wanted to name him Bo. I said, ‘What if we give him two first names? What if we call him Bo Beckett?’ And she said absolutely not. So it’s Beckett.”

It hasn’t been officially announced, but Dylan told Lon he will hold a benefit concert later this year in his home area of northern Louisiana: “Tim McGraw & I are from the same area, and Tim started something called Swampstock. He hasn’t done it in a while, and I decided to do something like that myself called Bayoustock. We’ll raise money for kids who need Christmas presents. It’ll take place November 17th.”