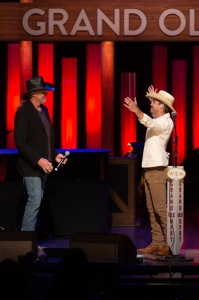 This week’s co-host Dustin Lynch tells Country Countdown USA’s Lon Helton what it feels like to become the newest member of the Grand Ole Opry: “It still feels a little weird, because I feel like I’m just getting started. And I hold being a member of the Opry at the top of the mountain. It’s one of the top accolades you can get as a country singer. So to get it so early on in what I feel like is my career is just amazing.”

Dustin also said he was very surprised when Trace Adkins invited him to be the next member of the Opry: “Trace was celebrating 15 years as a member of the Opry. He was coming out between songs and talking with the other artists during the show, so it didn’t catch me off guard, I though we were just gonna chat. Then he starts telling me how special it was to be a member of the Opry. So then when he popped the question, it was all I could do to hold back the tears.”

Turns out that Trace was one of the first country stars Dustin ever met. “Down in Tullahoma TN, at a car dealer, Trace was doing a meet & greet, I took my high school girlfriend. I asked him for a picture, and he looked down at her, and says to me, ‘You’re dating this little shrimp?’ Who would have thought 17 years later that guy invites me to be a member of the Opry.”

Who were some of the people you heard from? “My phone was busy that night. It’s great to see the outpouring of love. To hear from Darius Rucker and Brad Paisley.  Even Luke Bryan called me the next day and was so pumped for me. He was like, ‘Man that’s something I want to accomplish.’ I look up to Luke a lot, he’s taught me a lot, so to beat him in there is awesome. But it’s something I know he wants to achieve as well. Now he has to pray for my vote!”

Dustin Lynch will be inducted as the next member of the Opry next Tuesday September 18. Dustin has given the Opry a list of people he hopes will induct him. He told them, “Surprise me.”