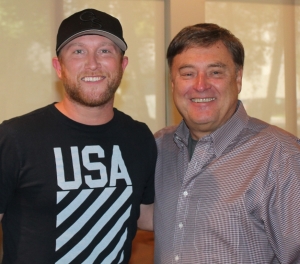 This week, Cole Swindell co-hosts the Countdown. Cole & Lon discuss Cole’s Ready To Drink Again Tour, his new album All Of It, and a lot of Cole’s friends in the Top 30.

As Cole begins his headline tour, Lon asked him who he looks to for ideas: “I’ve learned from everybody we’ve toured with. In August, I went to Boston to see Kenny Chesney’s last show up there. He was nice enough to share some wisdom with me. He said, ‘You probably want it all right now.’ I was like, Yeah. He said, ‘If I’d gotten everything when I thought I needed it, I might not be here.’ So it was cool to hear it come from the man himself.”

Cole is a huge fan of Garth Brooks, and he told Lon he first met Garth at the ACM Awards in 2016. “I met him on the red carpet. He asked me about my nomination, and he said, ‘I’ll tell you something a friend told me when I was nominated. He said, ‘Congratulations either way, it’s an honor just to be nominated.’ Years later I saw him at the CMAs, and he said, ‘You know who gave me that advice? Billy Joel.’ And he walked away. That’s one I’ll never forget, and he’s always been super nice to me.”

Cole has been friends with Luke Combs since before Luke had a record deal. “That guy is on fire. We’ve been buddies a long time. We each had a show in Houston, they got done with theirs and came over to my show to hang out. I saw they just announced a headline tour and its all sold out already. So he’s gonna be here a while.”

Cole is also friends with “the other Luke,” Luke Bryan. He just opened his new 32 Bridge Food & Drink in Nashville, and invited Cole to perform: “He shut down Broadway, and we sang one of my songs. I love his new bar. I think I’ve been to all my fellow artists’ bars, and Luke’s is the latest one to open. But he has a sushi bar and it was some of the best I’ve ever had. To have your own bar with a rooftop, that’s my goal someday.”