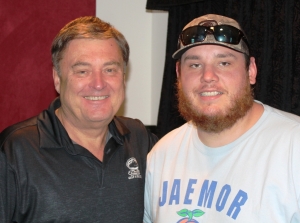 This week, Luke Combs co-hosts the countdown, fresh off the plane from his recent tour of Europe.”I barely had time to shower, but I got it done, though. It’s a priority for sure.”

A few weeks ago, Luke found out one of the contestants on The Voice sang “One Number Away,” and is now on Team Blake. He told Lon, “It turns out this kid is from North Carolina, and he’s from the same town as my bandleader. So that evening, we got his phone number, and we facetimed him! It’s so cool to see somebody play one of our songs on there. It was such a cool moment.”

Luke is a huge fan of Eric Church, and he was in Europe when Eric’s album was released, but he still got a copy and heard it: “I’ve got it. My favorite song is ‘Some Of It.’ They’re all good, and I always dig anything he puts out. I said on Twitter ‘Some Of It’ is Top 5 for me.”

Luke will launch his first arena headline tour in January. Lon asked if he will have a surprise entrance? “No I think I’m over the weight limit for any launching thing. They might have to get a bobcat and dump me on the stage. I won’t be in a harness flying through the air. They don’t have a harness that’s big enough.”

Luke told Lon he just bought a new home near Nashville: “It’s west of town, and its going to be nice. There are turkeys and deer, I was actually there this morning. We’re excited to get some furniture, and have the families come over and do Thanksgiving out there.”

The CMA nominations were announced a few weeks ago, and Lon asked Luke where he was when he got the news: “I was in bed, and my girlfriend was shaking me, it’s 7:30 in the morning, and I’m still coming out of my REM sleep. I call one of my managers, and she’s screaming, and I’m like, ‘Hold on here, I’ still in my tighty whities. Let me get some pants on, and I’ll call everyone back.’ It was really unexpected. To be nominated for anything. I will be nervous that night. I’m nervous now talking about it.” Luke also said he’ll be performing on the show.