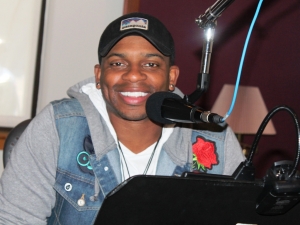 This week, Jimmie Allen has his first Top 10 song with “Best Shot.” We got a chance to speak with him the day he got the news:

Have you seen the chart? “I’ve heard some rumors I might be at #10, which is crazy.  I believe being in the Top 10 means you’re at a point where not only the song is doing well with radio, but it’s also doing well with their listeners, people who request it.  They ask listeners what’s their favorite, and I’ve been blessed to be #1 or #2. So the people who listen to the radio like my song a lot. So being in the Top 10 means a lot.”

Do you feel it when you’re doing shows? “Oh yeah! You feel it! I remember when the song was in the Top 50.  Maybe two people knew it. Ever since it was Top 20, it was different. I played a show the other day, and they were singing it from the first notes. They sang the entire song with me, even to the end. I was like, wow! I like it! It’s a great thing man.”

Once it got into the Top 20, it really moved.  You even jumped Garth! “Yeah I heard about that. That’s pretty crazy. I’m like, wow, it’s one of those things, I’m so grateful to radio for giving my song a chance. For them to feel comfortable with my song and play it for their listeners is amazing, and then for the listeners to connect with the song and call in and request it is means a lot.”

Now your album is out: “My album Mercury Lane, I’m so excited for it to come out. I’m so happy to see it all come together. For me, it lets me know I wasn’t crazy. I sacrificed so much because I believed in it. It’s validation that I’m good enough and have something to say that a few people want to hear.”

Let’s go back and get some of your background.  You’re from Delaware!  “People ask me all the time, ‘There’s country music in Delaware?’ We’re about as rural as it gets.  I come from a town that had 800 people. We grew up on chicken plants, cow farms, corn fields. There is difference between country people in the north, and country in the south.  We’re the same, but different. We’re country boys, but we’re blunt, because we’re from the north.”

Why did you come to Nashville? “All my mom listened to was Christian music, and my dad listened to country. So for a while that was all I had.  I was too country for pop, and too pop for country. Nashville was more like home, so I packed up and moved here.”

First thing musically? “I played at Cadillac Ranch, Fiddle & Steel, Rippy’s, and a lot of places. It was fun. Every musician who comes to Nashville should have that experience, because you learn how to entertain.  It can also be a trap because you can get fake fame, where you think you’re the reason they’re coming.  I didn’t want to stay too long.  Then I went back to writing songs.”

You’ve made your Opry debut. What was that like? “To be able to stand where so many legends have stood is amazing. After I sang Best Shot, I got a standing ovation.  Pretty amazing.  I once saw Darius Rucker there, but had never played it. I told myself I’m gonna play there, keep working hard til I can play there. Keep setting goals and reaching them.”