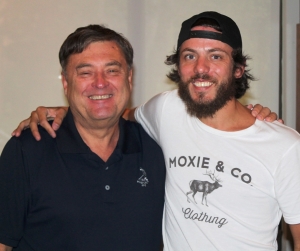 In Case You Missed It: Chris Janson co-hosts the countdown this weekend. His current Top 10, “Drunk Girl,” is nominated for CMA Song of the Year and Video of the Year, and Chris has a third nomination for New Artist of the Year.

Chris told Lon who called first to congratulate him: “First phone call was Keith Urban. It meant a lot to me. I’d never been nominated for a CMA Award. It’s gratifying to be nominated. Hopefully we’ll be able to take a trophy home, but either way I feel like we won, because getting nominated is a big deal.”

Lon asked Chris when he knew Drunk Girl was more than a great song: “When it got on the radio. I didn’t play it live til it got on the radio. This song can be a little scary for a singer. It’s different from Buy Me a Boat and Fix a Drink. Once it was on the radio, it was a done deal. To see the messages that have come as a result of this song is pretty unbelievable.”

Earlier this year, Chris was made a member of the Grand Ole Opry by Garth Brooks. “You talk about a surprise, I was stunned and shocked. The fact that he took the time, it’s so humbling. I didn’t know he was there. When he walked out, I fell apart, he fell apart, we were all crying, it was a great moment. I can honestly say Garth Brooks time-stamped my place in country music.”

Chris told Lon that Luke Bryan was the first person to call him when he was invited to become a member of the Opry. Lon played Chris some tape of Luke saying he wants to play the Opry soon. Chris told Lon, “I’m going to host him on my segment. I haven’t told you this but I’ve put myself in line to do some hosting. Luke will be my first invite. ‘Luke Bryan…please make him welcome.’ I’m gonna do it!”