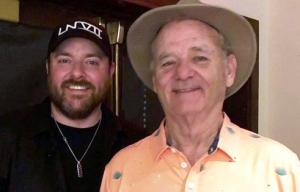 This week, Chris Young takes a break in his Losing Sleep World Tour to talk about a busy year, his new dog Porter, and what it was like to play a round of golf with comedian Bill Murray.

“The tour has just been nuts. I mean that in every way. It’s been incredible, and just an insane year. So many sold out venues. It’s been awesome.”

Chris has had company for the first time this year. He got a dog as a Christmas present last year, and Porter has joined him on the bus. “He’s doing really well. He has a huge Instagram following, almost 60,000 followers. It’s been cool having him. He’s able to go everywhere unless we have a fly date. He hangs pretty much everywhere. He got on stage during one show, and didn’t want to leave.”

Chris has become friends with Garth Brooks, and he told Lon the two exchanged emails recently: “I’ve emailed back & forth with him, because I sent him a message once I saw how fast he sold out Notre Dame. He then told me congrats about selling out the Bridgestone in Nashville. So that was a pretty cool message to get.”

Lon asked Chris about rumors that he’s been in the studio working on new music. Chris answered, “There’s some stuff mastered already. I keep saying sooner rather than later. There are some song ideas and topics I haven’t touched before. I think people are going to dig it.”

Then he mentioned something we hadn’t heard before: “I’m producing a project now on somebody new, somebody I found. We’ll see what comes of that. It’s a band. I’ve got some other stuff going on.”

Last May Chris played a charity golf tournament with comedian Bill Murray. He told Lon it was another item checked off his bucket list: “I didn’t tell them how much of a Bill Murray fan I am, but I’m a huge fan. And they paired me with Bill. The funniest part is I’m not a good golfer, and he’s really good. I was on one hole and totally skulled this thing. Everybody started laughing, and I said, ‘I told you I wasn’t any good, so stop laughing.’ I sit down next to Bill in the cart, and he gets really quiet, puts his arm around me, looks me in the eye, and goes, ‘No, you’re terrible.’ I just laughed out loud. It was awesome.”