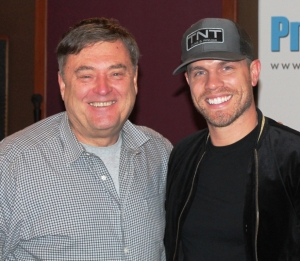 Lon’s first co-host for 2019 is Dustin Lynch, who said 2018 was a big year for him: “Dream come true after dream come true, with the top of that list being invited to be a member of the Grand Ole Opry.”

That of course happened in September, and he told Lon it was quite a surprise: “When my main squeeze, Miss Reba McEntire, walked on stage and surprised me. Just amazing she would take time out of her life to be there on that special night for me and my family. That was just awesome.”

Dustin told Lon the first thing on his 2019 list will be a winter vacation in Bali, which is part of Indonesia “In a few short weeks, we’re going to Bali. I’m all vaccinated, and ready for the jungle. It looks amazing. I will miss most of January. For me, I hate the cold. So January in Nashville is something I don’t want to be a part of.”

Right after that, he will head to Mexico for Luke Bryan’s 5th annual Crash My Playa: “It’s my 5th year kicking my year off as a pirate. I’m the only artist to do it every year with him. I don’t know why. He calls me the Mayor of Crash My Playa. I can say it’s my favorite week of the year. It’s so much fun, and you get to play a concert on a beach. It’s a wonderful time.”

Dustin did two shows with Garth Brooks in 2017, but it was a surprise show in 2018 that Dustin will never forget: “At the Country Radio Seminar, I got done with all my events, and decided to hit a couple of Nashville honky tonks. I see a line outside of Layla’s, and it was for Garth & his band. I tried to get in, namedropped, they don’t care. I went to the back door, and there was a guy there too, and he wouldn’t let me in. Went back to the front door, and someone recognized me, so he snuck me in. For an hour and a half, I was ten feet from Garth, one of the coolest nights of my life.”

Dustin said there’ll be some new music in the new year: “We had the holiday break to get in the studio, so I’ve got new music ready to rock to kick the new year off with. It’s pretty exciting. We’re putting the final touches on a few things. It should be ready here pretty soon.”

Lon & Dustin congratulate Mitchell Tenpenny on his first #1 song. “We were on our way back from a show in Georgia, so it was around midnight, we got the call, and I broke down in tears. Then we took a bunch of shots, got home around 5AM, went to bed.”