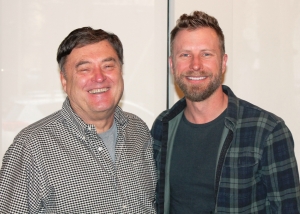 This week’s co-host Dierks Bentley told Lon he just returned from a few weeks in Telluride Colorado: “I was out there for three weeks. Went out to LA to sing on The Voice, then went to Colorado, and just got back.”

So you spent Christmas in Colorado. You have three kids, Evie is 10, Jordan is 8, and Knox is 5. How did Knox do this year? “He’s a wild man. His favorite hobby is to fight. For Christmas he wanted a motorcycle, and we got him this electric scooter, and he rides it all over the house. He crashes into stuff. He’s a good rider, but it’s hard to ride when you’re butt naked, you crash into stuff. I sent a video to Tyler Hubbard, and he said, ‘Knox is ready.’ Life in technicolor. It’s very crazy, very busy.”

Back from Colorado, and you just kicked off the Burning Man Tour, with Jon Pardi: “He came out early on and did an opening gig, and this is his final round opening for us. One more go-round with one of my favorite guys. We just did a funny video promoting the tour. Called ‘Burning Man On Ice.’ It’s a skating to music thing. Kind of a spoof of Blaze of Glory.”

You said you did The Voice, so how was it? “It was awesome to see the studio where it all happens. My kids loved it, they all sat in the chairs. My kids are big fans. I told my family I was going to sing on The Voice, and they all wanted to go. Everyone loves The Voice. Blake is still the same guy, still drinks the same drinks and it’s cool to see him in his element.” Dierks posted a photo on his Twitter and it’s below.

Dan & Shay joined Dierks at his Seven Peaks Festival last summer, and Dierks said they hung out in the Zen Den: “That’s a little cabin backstage, just a place to get their Colorado on. Bean bags lying around, people chill out there, I’ve never been in there. Too smoky for me in there. Very Zen.”

Dierks ran into Thomas Rhett while they were out in Colorado. “I’m a much better skier than Thomas Rhett! He’s got a long way to go. He needs help. He dresses cool, though. He’s covered in snow because he falls so much. But he snowboards too. He’s a good pal, we were both busy with our families out there, so we couldn’t hang as much as we would have liked.”