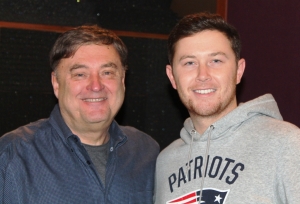 The day Scotty McCreery came in to co-host the Countdown, he was wearing a New England Patriots sweatshirt. So of course, that became a topic of discussion. “I feel like I have to explain myself, since I’m from North Carolina. But my dad grew up in New England, and was a fan of the Red Sox and Patriots. So he raised me that way. People say ‘You don’t talk like you should be a Patriots fan.’ I’ve been to two Super Bowls, and they won both.”

In the last few weeks, Scotty & his wife have added a dog to their family, and Lon asked him about it: “It’s a yellow lab, his name is Moose. That was the dog Gabi wanted, she had the name Moose. He’s small now, but I think he’ll grow into his name. He hasn’t been on the road much yet. We had a few hometown shows, we showed him to the crowd, and had the Lion King music for him. He’s already got 30,000 Instagram followers.”

Scotty & Gabi had their first Christmas together. Lon asked what they did: “Her family has a tradition to travel for Christmas, so we spent Christmas in New Orleans. Instead of ham and turkey, it was gumbo and jambalaya. I loved it. I wouldn’t mind going there every year. We got our first tree together, went into the mountains and picked it ourselves. We named it Gus. We had a Christmas ornament shower last year, so we had a lot of ornaments from the special people in our lives.”

Lon also asked about their house: “We have an apartment here in Nashville, but we have a house in Raleigh near our families, friends, and our roots. We bought a new house, everything is new, on purpose, it’s not mine or hers, but ours. Two became one, she is my better half, and it’s a team effort. Coming home to her, it’s just perfect.”

Scotty has been on tour with Jimmie Allen. Scotty says they actually met during American Idol in 2011: “He was on the show with me, we made Top 40 together, and I remember passing guitars around. I knew his talent back then. Everybody has a different path, and he didn’t need that show.”

Scotty sang his current hit at their reception: “That was a special moment. In the song, there was foreshadowing about the wedding, so singing it that night was very special.” They’ve been married for seven months, so Lon asked if people in the family have asked about kids: “The night we got married. The minute we said I do, the aunts and uncles and grandparents all wanted to know.”