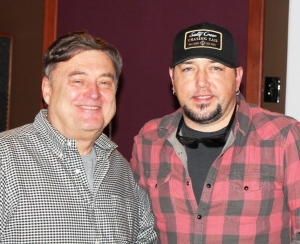 On Monday, Jason and Brittany Aldean welcomed a baby girl to their family. This week Jason co-hosts the Countdown with Lon Helton, and explains how they named her Navy Rome: “Britt & I would put names on a list, and that’s what we did with Memphis. It was the only name we both liked, and was a little different. She wanted to name Memphis: Roman. I was not into that. So when Navy came along, she wanted her middle name to be Rome. I think it’s cool for a girl. So that’s how Rome came into the mix, but Navy was just a name we both thought was cool.

A few weeks before Navy was born, the Aldeans had a bit of tumult around their house. Jason explained, “We’ve been in the process of selling our house. It’s been on the market for 6 months. On Friday, someone came to see it. By Sunday, we sold the house to them, and they wanted to close in ten days. So I had to find a place to live, pack, and move in 5 days.”

Last time he co-hosted, Jason told Lon he had a bowling alley in his house. So now that he sold that house, will his next home have one too? “Of course! We use it a lot. Our house is the hangout. So when we were building our new house, we were like, how could we not have one?” However, they won’t be moving into their new house for at least another year.

So besides the bowling alley, what else is Jason building in this new house? “I’m building a pretty substantial lake at the new house. This is where we plan stay a long time, so we’re making sure it has everything we want. It’s where Memphis will fish for the first time. It will be big enough so we can have a boat with a trolling motor in it.

Another country star who has built a lake at his house is Jason’s friend Luke Bryan. Jason had this message for Luke: “Luke, I need you to come to the house, and bring your lake guy. He hasn’t been to the new place yet. I keep telling him to call me and stop by there. He’s on American Idol, it’s hard to get in touch with him.”

Jason had Luke Combs on his tour last year. Jason told Lon that baseball isn’t one of Luke’s skills. “On the road, we play softball. So had him pitch, and he didn’t throw a strike. So I moved him to first base. The next inning, I caught a ground ball, threw it to him, it hits his glove, and it fell to the ground. So then I figured maybe designated hitter is his role. Keep him off the field. But it’s just fun.”