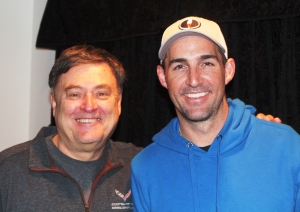 This week’s co-host is Jake Owen, and he told Lon that he’s been traveling a lot so far this year: “I started the year in Phoenix, I played the Open, went to Pebble Beach, Daytona 100, Crash My Playa in Mexico, and Vail Colorado, so I’ve been all over the place.”

Jake has spent the past few weeks shooting a movie in Alabama. The movie is called “The Friend,” and Jake described it this way: “It’s based on a true story, written by the husband of a woman who was struggling with ovarian cancer. He wrote about how a friend came to live with them to help them out. It’s definitely different. Everybody’s been nice, but I don’t know what I’m doing. They know that I know that I don’t know what I’m doing.”

When Luke Bryan was Lon’s co-host a few weeks ago, he had a story about Jake at Crash My Playa. They went paddle-boarding one day, and were surprised when pictures of them ended up on TMZ. Jake confirmed the story, and said: “I don’t know where they got those pictures from. Because nobody was around. Next thing you know, but if that’s all they got, that’s good.”

Jake’s current hit Down To The Honky Tonk is nominated for ACM Single of the Year. He told Lon, “The other songs nominated with me were all multi-week #1 songs. I find it interesting that my song is the only one that isn’t #1. I’ve gone ten years without a nomination. Sometimes it takes a special song to make it happen.”

Jake and his girlfriend Erica are expecting a baby girl in a couple moths. He told Lon about the baby’s name: Paris Hartley Owen. “We were looking for names, and because my other daughter is named Pearl, we wanted another P name. I came across Paris one day, so I ran it by Erica, and she liked it. It’s ironic because one of my favorite foods is Vietnamese pho, and her initials will be p-h-o.”

Jake, Michael Ray, Clint Black, and Randy Owen were at the annual St. Jude seminar last month. Jake was honored with the Angels Among Us award. He told Lon, “To be given that award on the 30th anniversary was very special.”

That day, he received a request from Michael Ray: “He just asked me to sing at his wedding. He said ‘Carly & I love your song. Would you sing it at our wedding?’ So I said yes. It’s flattering when another artist asks you to do that. It’s funny when a song means that much to another artist. We’re both from Florida, so I’ve known him for a long time.”