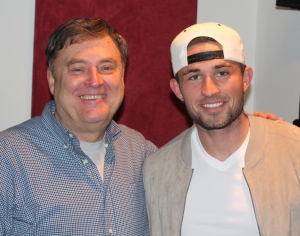 This week, Michael Ray co-hosts the Countdown with Lon, to talk about his engagement to Carly Pearce, his ACM nomination, and his 19 Tour.

It’s been fun, we’re in the middle of wedding planning as we speak. I say WE are planning, but it’s her and her mom are doing the bulk of the planning and I do the last minute approval. I say ‘I love that!'”

Do you expect to get it done this year? “It’ll be this fall. We found a weekend that was open, so we grabbed it. We’re very fortunate that we’re able to be this busy, but we have to mark those calendars quick.”

Michael told Lon that he realized quickly that he & Carly had a lot in common. “Our stories and our paths so similar. The first time we hung out, we sat in her kitchen for 4 or 5 hours, and talked about our lives. Both of us didn’t realize how much our grandfathers had played such an instrumental role in our lives and our careers. It was both of us having that feeling, the similarities about our grandparents.”

Lon then asked how they met? “We knew each other, as artists and songwriters, but never hung out. Then we met at a radio show. Then we were both New Faces at the Country Radio Seminar last year. Then she started contacting me, then the conversation would continue. She invited me to the #1 party for her single ‘Every Little Thing.’ So then we started hanging out, and here we are.” 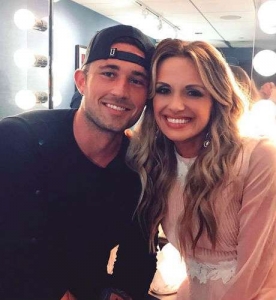 Of course Michael & Carly aren’t the only country artist couple. Lon asked if they’ve sought advice from others: “We had a three couple hang with Kelsea & Morgan and Maren & Ryan. The girls hung out at Kelsea’s place, and the guys went out for drinks, and then we met back up at Kelsea’s place. So we asked how they do things, how many days apart do you go, how hard was it? We want our relationship to be the #1 priority.”

On other subject Michael & Lon touched on was Michael’s milestone birthday last year: “I learned that 30 comes up pretty quick. I felt lost after my grandfather died. I made big changes in my life. Then Carly came into my life. Then this big snowball effect happened where I realized who I was, and I think 30 had a lot to do with it. The last year has been important in that way.”