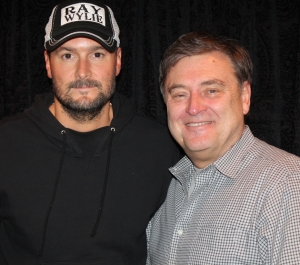 This week’s co-host is Eric Church, whose latest project “Desperate Man” is nominated for the ACM Album of the Year. He is currently on his Double Down Tour, and his latest single just entered the Top 30.

Lon asked Eric to describe the tour: “We’re doing two nights in every city, two different shows, 3 to 3-1/2 hours. Right now there are 25 songs you’ll hear one night that you won’t hear the next. If I play Smoke A Little Smoke one night, I don’t have to play it the next night. The main thing is we’re gonna try to take over those towns and make them as epic as we can.”

Eric just entered the countdown with his latest single: Some Of It. He told Lon this story: “That was the last song that made the album, and it wasn’t supposed to be on the album. We were at a show, playing the album for a friend of mine. And my wife played him the demo of Some Of It. That night, it sounded like it finally belonged. So I called my manager, went in the studio the next day, and cut the song, and here it is.”

Lon asked for an update about Eric’s sons Boone & Hawk: “They’re on the road with me all the time. It’s a lot of fun having them around. It’s probably bad for my future. They both sleep better on the bus, they both enjoy touring probably more than I do.”

Lon also asked how do they get along? “They’re a little physical now. They’re both big for their age. Boone is like a big bear, if he swiped at Hawk, he’d go flying. Now Hawk wouldn’t quit, but he’d get the best of him now. They’re at a moment in time that’s special for me as a dad.”

Eric has done a number of tribute projects, and recently he was part of John Lennon’s 75th birthday celebration: “That was something for me, John Lennon is a Mount Rushmore guy. I played ‘Mind Games,’ and to honor a guy who’s meant so much to me musically. He’s someone I aspire to be like and write like, and make records like.”

This week, Luke Combs once again has the #1 song, and Eric had this to say about Luke: “I love Luke, I love his authenticity, he’s the kind of guy who would have been OK if all this never happened. He has a pure heart. I think that’s what’s allowed him to have the success he’s had. I think the future’s bright if he’s one of the guys carrying the torch.”