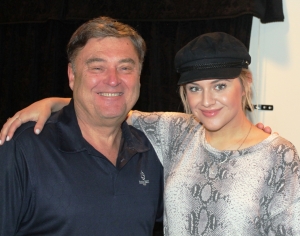 This week, Lon’s co-host is the newest member of the Grand Ole Opry: Kelsea Ballerini. She told Lon, “That was the highlight of my career. For any country artist, that’s an iconic goal moment.” She received the invitation from Little Big Town.

Her induction came from one of her musical idols: Carrie Underwood. “I’m a super fan of Carrie, she knows it, everybody knows it. She called me and said she wanted to sing a song with me. We decided to sing ‘Walkaway Joe.’ I thought it was really amazing of her to do that.”

There was also a surprise moment that night. According to Kelsea, “The coolest part of the Opry induction was not on stage. Carrie & I were rehearsing Walkaway Joe, and all of a sudden we heard a 3rd harmony. Keith Urban had walked into the dressing room. The next day, I posted it, and he texted me asking if he could send it to Garth. Afterwards Trisha sent me flowers.”

Kelsea had another amazing night recently: “Ed Sheeren was living in Nashville for a bit. He & I had been writing, and he asked if I wanted to go to dinner with him and Luke Combs. I don’t know Luke, but we got to hang out that night. We had so much fun, we ate and then played pool.”

CMA Fest begins next week in Nashville, and Kelsea is very involved: “Me & Thomas Rhett are hosting the TV special again this year. It’s our third year, and this way, I not only get to perform and host, but I also get to be a fan, and that’s what it’s about.”

Kelsea’s husband is rising country star Morgan Evans. She told Lon the story behind his current single Day Drunk: “This song is actually about my birthday 3 years ago. I had just gotten in from the road, and he had this whole day planned. I was so tired I said can we just stay in an open a bottle a champagne, and it was the best birthday ever.”

Kelsea just wrapped up her headline tour, and she told Lon she is done touring for the year: “I’ve been non-stop touring, so I need to take a minute. I have to make a record so I need some time to do that. I’m kind of done doing a big tour til next year.”

So what’s the plan for the new music? “This next one, we have the first few singles ready to go. But before we call it an album, I want to make sure I’ve written everything I can write, and have time to play in the studio. So I’m excited to do that this time.” Kelsea says the new music will be released in the fall.