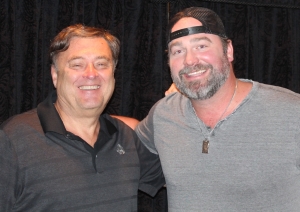 Lee recently had his first role in a TV movie: “Wedding At Graceland” for the Hallmark Channel. He told Lon how it came about. “Kellie Pickler was part of it, and she got my name in the mix. I had to play myself, as the wedding singer. I sang an Elvis song, ‘I Can’t Help Falling In Love With You.’ I think I may have stepped in over my head, but I got some compliments for it, so it’s all good.”

Lon asked him about singing with Garth Brooks at Stagecoach last year: “I was in the front row and stood there with Ashton Kutcher watching Garth, and he brought me up on stage to sing with him. I’ve done it a few times, and it’s always mind blowing and special.”

Lon then asked him about Ashton Kutcher: “He loves country music and he’s a huge Garth fan. So we were both fanning out on Garth. We went backstage and saw Garth, so now we have a text chain with Garth & Ashton and it’s a lot of fun.”

Lee recently celebrated his 40th birthday. He told Lon about his party: “I did it in style. I called it the pond-toon party. We put a pontoon boat in my lake, and had some friends over, drink cold beer and get sunburned. I just wanted to stay on the farm and just float in my pond.”

We saw a picture of Lee and his wife at the Kentucky Derby, so Lon asked him about it: “It was awesome. You know all those people who were upset at the way it finished. I put money down on Country House because it had ‘country’ in it. When he won, nobody could believe it! I put $100 down and it paid 65 to 1! It came in second, and then it came in first! Boom!”