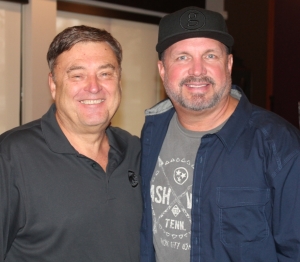 Garth Brooks returns as Lon’s co-host to celebrate “Dive Bar Day.” It’s also the 7th day of the 7th month, and 7 is Garth’s lucky number. Lon asked how Garth how he will celebrate: “I think we’re gonna be filming the video for Dive Bar. And if I know Blake, being the businessman, we’re probably gonna film it in a dive bar he’s very familiar with.”

Lon then asked what we’ll see in the video: “The whole thing’s gonna be under water. It only makes sense in a dive bar. We’re gonna shoot it with an under water effect on it. I don’t do a lot of videos, unless they bring some kind of third dimension, and this one will definitely do that.”

The Stadium Tour continues, and the next stop will be Boise. Garth says that will be another chance to meet up with Blake: “Blake was booked every Saturday. But we were lucky enough to sell out the Saturday show in Boise. So the governor called, and asked if we’d do a show on Friday. Then we found out that’s the one day Blake is open. We’re gonna film it, audio & video, it should be pretty fun.”

Lon asked why he decided to do this song as a duet: “I was gonna have to change a line, ‘Think of this as your oasis,’ because we have that in Friends In Low Places. But to hear somebody else sing that got me chuckling. It kind of gave it a breath, and made it different from any other Garth thing we’ve done.”

The song “Dive Bar” will be included on Garth’s next album, due out later this year. The album will be called “Fun” and Garth described it: “There will be two ballads, “Stronger Than Me” and “The Courage Of Love,” that we did for America’s Got Talent. But the rest are songs like “Party-Gras,” “It’s a Hard Way To Make An Easy Living,” and this whole thing makes me smile.”

Earlier this year, Garth invited Midland to open for him: “These guys should have their own TV variety show. At sound check, they all come out just wearing shorts. No shirts, doing sound check. These are my kind of guys. When you talk about the echoes of traditional country music, these guys are doing it right.”

Trisha Yearwood has announced a fall tour, and Garth told Lon he’ll be there too: “It will be an honor for me to just be her support. We made a vow to spend as little time apart as we can. So I’ll be arm candy. I ill always have the right thing to wear. I’ll have a short that says ‘Plus One’ on it. I can’t spend time away from her. It’s impossible to breathe without her.”