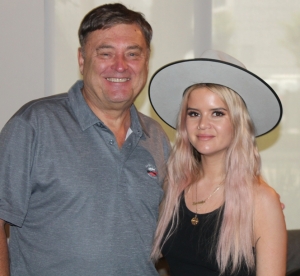 Lon’s co-host this weekend is Maren Morris. She explains the background behind her current hit “Girl.” “I had a falling out with another woman who is an artist. Things like that keep me up at night. I tried to reason with her, saying why are we picking at each other when we should be celebrating each other. I started writing Girl about this, and realized I was writing it about myself, and admitting I am the problem. After that, I reached out to her again, and now we’re great!”

Maren’s husband Ryan Hurd was a writer on Lady Antebellum’s new song “What If I Never Get Over You.” She told Lon, ‘I remember when Ryan played me that song with him singing the demo. It hit me so hard. Then when I heard Lady A was going to sing it, I knew they would slay it. It felt like a hit when he wrote it, and it feels like a hit now.”

Earlier this year, Maren performed with Dolly Parton at the Grammy Awards: “She was everything I hoped she would be. We’re like the same height, so we talked about short girls and how we get it done, and how our husbands are taller than us.”

Last month, she did an article and pictorial for Playboy magazine. She told Lon, “Because I had released my song Girl, they thought I’d be a fun person to interview. I remembered Dolly did the cover of Playboy in 1978. So I just sang with her, she’s one of my idols, and it would hopefully engender some conversation, and I was right!”

Lon asked if there was an epiphany in doing this Playboy interview: “Yeah it was like a perpetual epiphany. I’m proud of what I’ve achieved with my career, my body, and my mental health. I think this photo shoot is a visual representation of where I am in my heart. Very free, unedited, and hopelessly timeless.”