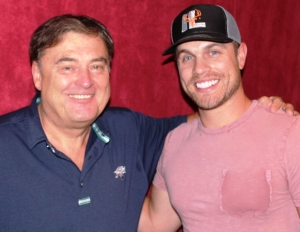 This week, Dustin Lynch co-hosts the Countdown with Lon. They talk about Dustin’s tour with Thomas Rhett, his appearance at the 5th annual Crash My Playa in Mexico with Luke Bryan, and his plans for releasing some new music

Dustin began the year with a two-week vacation in Bali: “It took us 32 hours to get there, we spent ten days there, rented an amazing house, it was a great experience, I’d love to go back.”

From there, he went to Mexico to play Luke Bryan’s Crash My Playa: “It was amazing, we had so much fun, but we were in the pool for so long, you can only “hold it” for so long.”

A couple weeks ago Dustin played in the John Deere Classic golf tournament: “So happy to be a part of that, I played well, made several birdies, and shocked myself.”

Dustin has been working on some new music: “It’s the first time I know exactly the kind of song I want to record, it’s taking us a while, but I don’t want to rush it. We’re looking for a couple more things.”

Dustin was present when Luke Combs became the newest member of the Grand Ole Opry: “They asked me to introduce him for his first song as a member of the Opry. That’s something I’ll remember forever.”