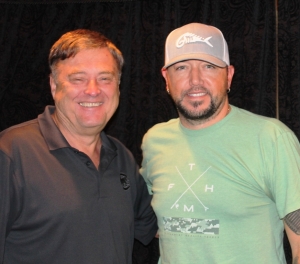 This week’s co-host is Jason Aldean. who updates us on his 6 month old daughter Navy, his 20 month old son Memphis, and the construction of his new house. He’s on his Ride All Night Tour with Kane Brown. Plus how he spent his summer vacation.

Jason told this story about his two younger children: “After Navy was born, it was cool to see, Memphis is this protective brother. If she wakes up crying, he’s running the door and waiting for someone to open it up and take care of her.”

Kane Brown is joining Jason on tour all year. Kane & his wife are expecting their first child in a few months. Jason told Lon, “Our wives are friends and in fact Brit is hosting their baby shower. So I can’t wat to meet their kid.”

It’s summer vacation time, and the Aldeans have been spending time at their Florida house. “When we go, I like to stay for a while. We went down for 5-6 weeks. I had a few shows during that time, but I flew in from Florida. I love the beach. I’d spend more time there, but I don’t think my wife feels the same way.”

Jason has been working on his next album all year, and told Lon about two songs: “Brantley Gilbert called and asked if he could send me a few songs. I said sure. So he sent us this song that was just what we needed, one of those rockers. Then I get a call from Tyler Hubbard of FGL, and he also sent me a great song that we cut immediately.”

Jason has been building a new home south of Nashville, and gave us the latest: “It’s been a long process, but hopefully after the first of the year, we’ll be moving in.”