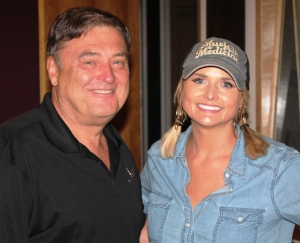 This week, Miranda Lambert co-hosts the countdown for the first time in almost 3 years! She told Lon she’s actually taken some time off: “I had 8 months off starting in December. It was nice to take a minute, unpack my make-up bag for once in my life. I did some self-preservation for a couple years, and that gave me new energy.”

Miranda added she wasn’t completely off. She made a record during that time, and did a few other things. So she came with a lot to talk about: “I’m freshly married, freshly have a new record out, a tour starting in September, so I’ve got a bunch of stuff happening!”

The new record is Miranda’s latest single, “It All Comes Out In The Wash.” She told Lon how the song came about: “It’s an old phrase my mom and grand-mom used to say, It’s a good metaphor to remind yourself that it’s gonna be OK.”

It’s the first single from Miranda’s new album, “Wildcard,” that’ll be released on November 1st. She explained the album’s name: “It came from my arm, because I got a tattoo of the Queen of Hearts wildcard on my right forearm. I’ve been through a lot these past few years. I got this tattoo to remind me to be the queen of my own heart. So that’s where the title came from.” You can see the tattoo below. 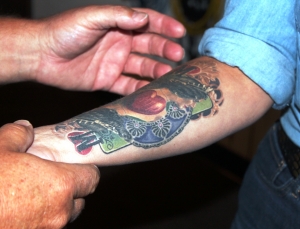 As you can see, it’s a pretty detailed tattoo: “It took 7-1/2 hours. I’ve never talked about it to anyone. No one’s ever asked. I worked with this tattoo artist in Oklahoma City, and he drew it up for me, and we talked about what it meant. All of my tattoos have meaning. So I feel I have a reminder on my arm to take care of me.”

One month after getting the tattoo, Miranda met her new husband, Brendan McLoughlin, and got married on January 26th. “That’s the last time they’re going to give me 8 months off, because I got married. I married somebody who’s a police officer, who has a steady 9 to 5 job, and so it’s been interesting to be part of everyday life.”