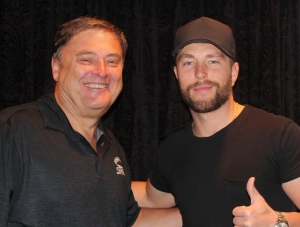 This week’s co-host is Chris Lane, who got engaged in June to Lauren Bushnell, a former contestant on “The Bachelor.” During the countdown, Lon asks Chris about his fiancé, their new home, their new dog, and their plans for getting married.

Lon begins by asking Chris how they met: “We met 4 years ago at a radio show in Texas. We became friends that night, and kept in touch. Last August, I was going to The Bahamas with some friends, and randomly asked her to go with me. It kind of happened that way, it was crazy.”

How did you pop the question? “I wanted it to be special, and I was writing a song called ‘Big, Big Plans.” One of my co-writers suggested to use the song to propose to her.. That’s what we did. We were at her family’s house in Portland Oregon, her whole family was there watching, I had it filmed as well, and I must say, never in my entire life have I ever been that nervous.” 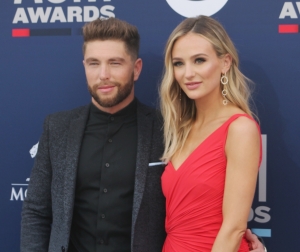 In the meantime, they recently bought a new house, and are in the middle of getting it ready: “We’re excited about that. Now we get to make it our own. It’s been an interesting process. I didn’t realize how stressful it can be as a couple to pick appliances and that kind of thing. We probably won’t move in until later this year or early next year.”

Does Lauren travel with you on the road? “Yes she goes out quite a bit. We just rescued a dog we named Cooper, and we take him out with us. But road life for her isn’t that glamorous. She’s on a bus with 12 guys, and I don’t have a bed in the back, so she has to sleep in a bunk. So we’re roughing it out there.”