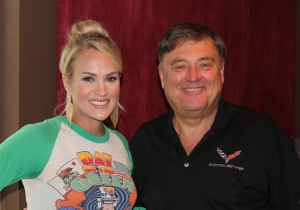 This week’s co-host is Carrie Underwood, who just kicked off the fall leg of her Cry Pretty Tour 360. She described her unique stage to Lon: “Our stage isn’t a stage, but a series of walkways, all in the shape of an eye, for the Cry Pretty album packaging. It looks really cool.”

Carrie told Lon that this tour is different from her last tour because she now has two kids “We started my last tour when Isaiah was 11 months old. With Jake, I didn’t want to put it off that long. So he was 3 months old when we started. Obviously I have an incredible support unit, it helps that my husband is retired and can come on the road with us.”

What’s Isaiah like at age 4? “He meets no strangers, he’s very friendly, he’ll talk to anybody. He’s also a dang flirt. He loves the all-girl tour. He loves Maddie. So he loves the ladies. He is the center of attention.”

It was also just announced that Carrie will co-host the CMA Awards with Dolly Parton & Reba McEntire: “I applaud the CMA for wanting this show to be a tribute to the women of country. I think we’re going to have some incredible moments.” Lon said, I’m thinking the wardrobe for this show… “It’s going to be epic! So many sequins and rhinestones and hairspray.” 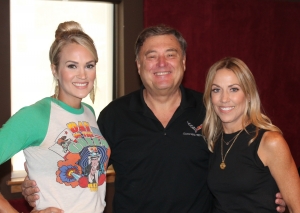 So what about Carrie’s former CMA co-host Brad Paisley? “Brad is one of my best friends, he’s been supportive of all of this, he loves the ladies of country music, and it will not be the last time that Brad & I will cut up together.”

Earlier this year, Carrie moved into a new house. “We’re finally in our house, and almost unpacked! We had to get in. We moved in before they were finished. Because I was gonna be too pregnant to move. But now that we’re in, we realized we have to change a lot of things. I have two boys and a Mike, who’s a bull in a china shop. So we just moved in, and a lot has to change.”