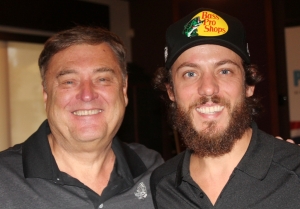 This week’s co-host, Chris Janson, will release his third album next week. He’s been on tour with Chris Young all summer. Plus he’s in our Top 10 this week with “Good Vibes.”

Chris told Lon that he received a very nice end-of-tour gift from Chris Young: “He gave me a vintage guitar, a 1935 D-18 Martin. I’m still flabbergasted by that. It’s a very humbling thing. That was by far the best tour I’ve ever been a part of.”

Chris’s new album features a very special guest: Blake Shelton. “When we wrote the song ‘Real Friends,’ I thought would be a great duet with Blake. I just knew when we were making the album, it sounded like a Blake song. It was a quick process. He said yes, and it turned out exactly how I thought it would.”

This album was a very personal project for Chris. “I wrote the whole thing, produced the whole thing, made it with real friends, which epitomizes the title. We cut the record at my house, I put it together in my ‘man room,’ it was just so organic. I was involved on every level, even down to the pictures.”

Chris has written several hit songs for Tim McGraw. Lon asked if he thinks about Tim whenever he writes songs? “All the time! I still send him songs. History shows we have great success together. When it hits, in the case of ‘How I’ll Always Be,’ I wrote that for me first. But it sounded like a Tim McGraw song. I can’t get that out of my mind. The first person I go to is Tim McGraw. I always look for a reason to give him something.”

Chris was part of Luke Bryan’s Crash My Playa festival earlier this year. He told Lon, “I was out with Luke a couple weeks ago. My youngest son & I got together with him to go on a dove hunt. To be such a big star, he’s just so real, he’s unabashedly himself. He’s always been nice to me and my family.