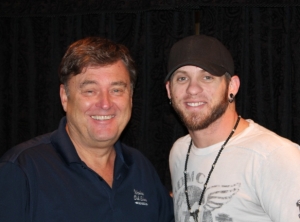 This week’s co-host is Brantley Gilbert, who just became the father of his second child, a daughter he & his wife Amber have named Braylen. Brantley also talks about his 2 year old son Barrett. His latest album is “Fire & Brimstone,” featuring his current Top 5 hit “What Happens In a Small Town.”

Brantley told Lon that he & his wife came up with the name for Braylen long time ago: “We came up with that name years and years ago. Way early on, when we first dated, we talked about the future, thought of names for kids, that was a name we thought of for a girl way, way back and it stuck.”

Lon asked how Brantley’s son Barrett is handling having a baby sister: “We worried about the jealousy thing, and we haven’t seen it yet. We imagine there’ll be some of that in the future. But so far, he just wants to hold her, and be close to her. He calls her ba-ba. Before he goes to bed at night, he’s gotta go give her a kiss, and I’m seeing a soft, tender hearted side of him when it comes to her.”

Lon also asked what has surprised him most about fatherhood: “Everything! I’ve never known love like that. I’m not a crier, you’ve probably figured that, but those kids can pull it out of me. Just hearing my boy say ‘happy’ for the first time, the smallest things mean so much. He’s something else, and she is too.”

Brantley had a funny story about Kelsea Ballerini: “Kelsea and I were playing a show together, and we got to talking. A few years ago, I bought a house in a subdivision, and I’m the farthest thing from being a subdivision guy. So apparently, Kelsea lived in that subdivision, and she told me that when we moved in, they baked us cookies. But they didn’t want to knock on the door, because they were afraid of me, so they just slid them under the gate and ran. What’s funny is I remember finding cookies just laying in the driveway. Lo & behold, they were from Kelsea!”