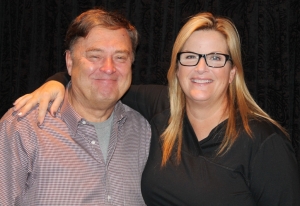 This week’s co-host, Trisha Yearwood, just released her first album of new material in 12 years, and is back in our Top 30 after an absence of more than 10 years. She’s headlining her first tour in five years, and she will host the CMA Country Christmas TV special next month. Those are just a few of the topics she discusses this week with Lon Helton.

Trisha says she heard Dive Bar while her husband Garth Brooks was writing it: “When he’s writing a song, I get to hear the start of it. I get to hear the melody start. When he’s on to something, he’ll sing it for weeks. Sometimes I’ll ask ‘What is that,’ he’ll say ‘I don’t know yet.’

Garth told Lon he’s looking forward to joining Trisha on her tour this fall. Trisha said, “He was adamant about wanting a laminate for this tour. When I gave it to him, he wore it at home. I call him ACE: Arm Candy Enterprises for the tour.”

When Kelsea Ballerini was Lon’s co-host, she said Trisha sent her 7 bouquets of flowers after becoming a member of the Opry. Trisha said, “It might have been more than that. I just tried to fill up the room. She & I have become friends. She recently guested on my cooking show. She’ll be on next season.”

Two weeks ago, Trisha performed at the Country Music Hall of Fame for the induction of new members Brooks & Dunn. “They approached me to sing ‘Believe,’ and I was nervous about that. But I realized the song takes care of itself. You always say yes to these things, and then when you’re standing in front of the artist, you wonder ‘what was I thinking.’ But it was an amazing night, I was so honored to be a part of it.”

We learned that Trisha has a connection to Jason Aldean. He grew up near Trisha’s hometown, and he knew her parents, and even performed at one of her shows in the 90s. Trisha said, “His dad became friends with my parents because he wanted to get some advice about the music business. But I think it was cool for Jason & his dad to have my parents to ask what it was going to be like.”

A few weeks ago, Trisha & Garth joined former President Jimmy Carter building low income homes as part of Habitat For Humanity. She said, “This is our 11th build with them. He’s 95 years old. He’s a big country music fan, and talked about watching the Ken Burns documentary. We took him to the Opry, and it was pretty surreal to sit with them at the Opry.”