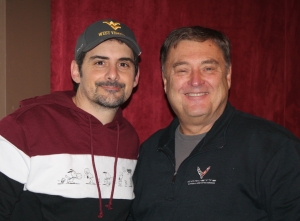 Brad explained how it came about: “I went to ABC with an idea that was part late night show in prime time, part awards show where nobody loses, and they went for it. We shot it in Nashville, in the middle of the show, we leave the theater where we’re shooting, walk down the street to Tootsie’s, and Hootie & The Blowfish are playing there, and I play a song with him. Then we both leave, run back up the street to where my band is still playing, and finish the song. The excitement of what Nashville is like is captured in that moment.”

Lon asked, Why did ABC give you a TV show? Did they feel sorry for you since you didn’t host the CMAs this year? “I think so. It must have been pity. I must have had a compelling case. I don’t know how I got it, but I’m glad they gave me enough rope to hang myself. But it was nice of ABC to let me do this. It must be some sort of charity. They must need a write-off!”

One of Brad’s guests is Carrie Underwood, except she doesn’t sing. “I had this idea for Carrie where I thought I’d take her out of her comfort zone. My plan was to take her out in a truck to do some mudding. But that’s not what happened. She took over the wheel, and she scared the living heck outta me. I’ve never seen the redneck side of her to this degree. There’s a lot of screaming, and it’s not her. Let’s just say I’m not acting in this segment.”

Keith Urban showed up at Brad’s concert in London last month. Brad told Lon there was even more to the story: “That same night, Hootie & The Blowfish was playing at another theater in London. Darius texted me about showing up for each others shows. Then Darius told me Keith was in town. I texted Keith, and he said ‘I just talked to Darius. What I play a show with him at the beginning, hop the tube, and then play the encore at yours?’ So that’s what he did, and that audience lost their mind.” 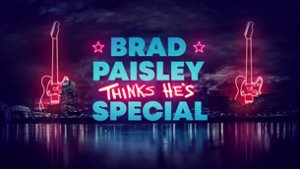