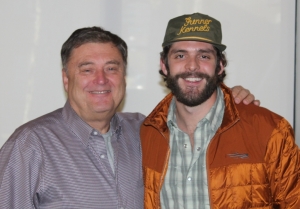 Lon’s co-host this week is Thomas Rhett, a nominee and performer at last month’s CMA Awards. Lon & Thomas talked about the CMA show, and Thomas revealed this: “It was the first time I messed up a song on national television. I sang the second verse twice. When you start to mess something up, you just have to go with it, or it becomes more noticeable. So that’s what we did.”

When Thomas returned to his seat at the CMA Awards, he found he was sitting next to an Eagle! “We sat next to Joe Walsh the entire night. I’m sure our daughter was driving him insane! I wanted to introduce myself to Joe, but I didn’t. I didn’t know what to say. I’ve had so many epic fails introducing myself to other people. Unless you have a mutual friend, I wait until they introduce themselves to me.”

Thomas & his wife Lauren are expecting their third child in a couple months. He shared this experience: “We went into the doctor’s office for Lauren’s check-up last month, and I noticed Maren Morris & Ryan Hurd were there. This was before they announced they were expecting. So I was like, ‘What are you doing?’ And she said, ‘Well, we’re expecting a baby!’ So we’re about to have babies within a month of each other.” 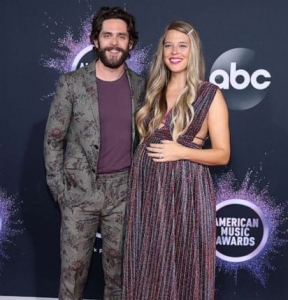 On the subject of kids, Lon asked if three will be it: “My wife wants 5 kids. She said that even before we were dating. When you marry someone who is that passionate about having kids, that passion rubs off. It’s going to be awesome to sit at Thanksgiving table with 5 kids. It’s amazing how our life has changed. I’m really excited to be the father of three girls.”

Plus, Thomas keeps in touch with his friends in country music who are also having kids, including Tyler Hubbard of Florida Georgia Line: “I saw Tyler last night, I see Tyler quite a bit. Especially at this time of year! We Christmas carol together every year. This will be our third year. First year we did residential houses. Last year we went down 12 South. No one has any idea who you are. It’s a tradition we hold dearly.”