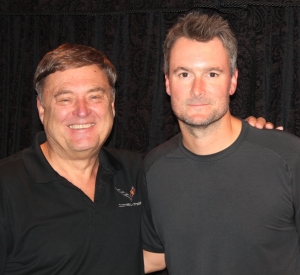 This Sunday, the 62nd annual Grammy Awards will take place in Los Angeles. This week’s co-host Eric Church has two nominations, and will attend the ceremony. He speaks with Lon about his nominations for Best Country Album and Best Country Song.

Regarding the Grammy Awards in general, Eric says: “If you’re a musician, they’re the holy grail for all genres of music. Just to get nominated, there’s such a big pool of what you’re up against. It’s not just what’s commercially successful. You really have to stand on the merit of what the music is, and I love that, and I love that we were able to get nominations.”

Eric’s latest album Desperate Man is nominated for Best Country Album, and Eric says: “I think in this day and time when people focus on singles, I still believe albums are more important than they’ve ever been. In order to be an artist, those albums are they key. It’s like a book. You don’t read just one chapter. Songs are the same way. That’s on the artist to make those albums, and that’s what we try to do.”

In addition, Eric’s #1 hit “Some Of It” is nominated for Best Country Song. Eric says “For me it was a song that had commercial success, but at the same time, there were a lot of hit songs. For it to find a path among five songs to be nominated just means a lot to me as a writer of the song.” 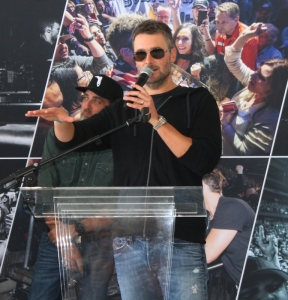 Eric also looks back at his huge Double Down Tour, and his record-breaking concert at Nashville’s Nissan Stadium. “That’s the best show I’ve been a part of…ever. It was one of those things, most special thing I’ve done, and I was locked in that day.”

Eric’s current Top 30 single is Monsters, inspired by the tragedy a few years ago in Las Vegas: “Monsters is the biggest epitome of the year I had in Vegas on this album. I had that happen with my child, and you think to yourself that if only it’s as simple as the monsters under the bed. You know that’s the least worry. There are real monsters out there. That’s one of my favorite songs we’ve ever done.”

He also describes writing the recent hit “We Were” for Keith Urban: “I wrote this song for the Desperate Man album, but it went to the wayside. It’s funny, songs find who they’re supposed to be with. He told me a story that when he was first dating Nicole, they’d ride together on his Harley. There’s a line about two leather jackets, one heartbeat in the moonlight. That’s my favorite thing about music. That’s the line he identified with. He did a lot better than I would have done with that song.”