Lon’s co-host this week is a very pregnant Maren Morris. She started the show saying, “I feel great. The last couple weeks, I’ve started to feel normal again. Just being bigger, and I’m 5-1, so I could topple over at any moment. Your balance is off, you’re clumsier. But I feel great today. Sometimes I don’t remember I’m pregnant. There’s just a huge belly in the way. I am ready to meet him, but I can’t complain. I feel very lucky.”

Lon asked about CMA night, when she felt the baby kick: “It was before I performed. I was 20 weeks in. Maybe he felt my adrenalin pumping. But it’s gonna be so cool to look back at that footage, and know he was in there. Someday he can watch the video and say, ‘I was totally there with you. Your good luck charm.'”

Maren says she’s spoken with many women in country music who’ve had children: “It’s nice to have a bond with people through parenthood because you don’t know what you’re doing. They’ve gone through the same confusion. Them being artists and balancing touring with having a kid, how to configure your tour bus, you have to have people to lean on, so we keep each other in the circle of knowledge.” 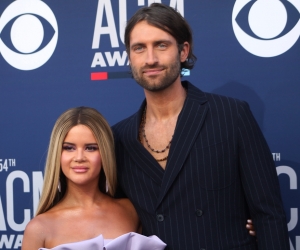 Maren’s husband Ryan Hurd is in this week’s Top 20: “I’m so proud of him. Every notch is a big achievement, and we celebrate every win, and we know how to celebrate. That song is so good, we knew the second he brought it home it was a hit.”

Maren’s husband was a writer on Lady Antebellum’s recent #1 What If I Never Get Over You: “Ryan and Lady A have had so much success together. It’s such a special song, and when it went #1, we went out and celebrated with all of them. I obviously had nothing to do with it, but I was there as Ryan’s support system.”

When Maren won her CMA Album of the Year Award, on her way to the stage, she walked over and hugged fellow nominee Eric Church.  Lon asked her about that moment: “Me being such a fan of his work, knowing he’s a fellow nominee, and I love his record so much, I honestly thought he was going to win, because it’s an amazing record and he’s had a massive year in touring. So I was in shock and also pregnant, and I was taking it all in. So he & I getting to hug before I walked up the stairs was such a sweet moment.”

The baby is due at the end of March, and she has a show a few weeks before her due date: “I’m doing the Houston rodeo in early March, which is insane. Thought it would be a great idea to be 9 months pregnant and do the rodeo. It’s my first time too. I’ll be very stationary during that show.”