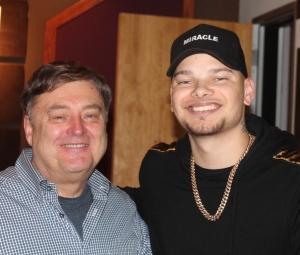 This week’s co-host is Kane Brown, who told Lon about his 4 month old daughter Kingsley: “I have a beautiful baby now. She’s amazing, she actually held her bottle for the first time last night. She’s the center of my universe. When she smiles, it takes my breath.”

Lon asked him to explain her name: “Originally we thought we were having a boy. So we were going to name him Kingston. Then we found out we were having a girl. We liked the aspect of ‘King.’ People told us we should have named her Queensley, I said no, it’s different having a girl and calling her King.”

Lon asked Kane to talk about the first few months as a father: “I didn’t change her for the first month, cause I was scared of her girl parts, I didn’t know if I should wipe down or up. It was brutal, but now I’m ready to go. It’s one of my favorite jobs because after she gets changed, she hits you with the biggest smile. I just pick her up and hug her. It’s an amazing feeling.”

A few weeks ago, Kane took part in the Celebrity NBA All Star Game. He was on the team coached by ESPN’s Michael Wilbon. Kane told Lon, “It was cool. I was excited because I played basketball and I was going to show off. But I didn’t except with my defense. I wish I got to play more, but I didn’t speak up. I’m soft spoken, so they didn’t play me much. The coach said, ‘I should have played you more. You’re a defensive ace!'” 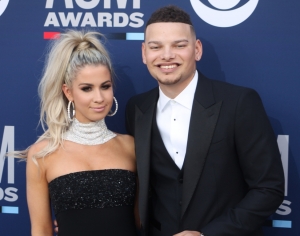 Kane just returned from his first tour of Europe. Lon asked what he liked most: “We had some time to sightsee, but I promised my wife, I didn’t go out anywhere, because when I go back I want to see everything with her. So I want that to be special. And I wanted to play X-Box, so I just stayed in my room.”

Kane told Lon that Jon Pardi and his fiancé were his guests for dinner recently: “We had dinner, got to talk about life. I told him that Heartache Medication is one of my favorite songs on the radio. He’s a great dude. We have a lot of friends in common. We just hung out on my porch and talked.”

By the way, Kane also said that Homesick is the last single from his current album. His next single will be coming from a new project later this year.