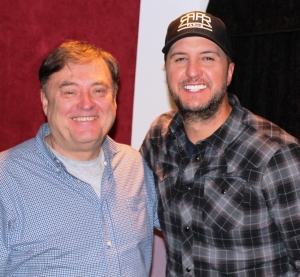 This week’s co-host is Luke Bryan, who tells Lon about the 6th annual Crash My Playa in Mexico, and the current season of American Idol. Plus a pretty exclusive Super Bowl party.

Among the artists at this year’s Crash My Playa was Jason Aldean. Luke said, “We had a blast, catching up, roasting each other, and talking about the good old days. I cannot drink tequila with Jason. On the last night, we were at the pool, and we were all going to sing together. But Jason lost his voice. He tried to hit a note, and it sounded like a cat. But we had a great time together.”

We’re about a month into this year’s season of American Idol. Luke told Lon, “I think this year is really incredible. I think our Top 15 is more talented than last year. It’ll all hinge on how America votes.”

One contestant Luke got to know was Doug Kiker, the garbage man. According to Luke, “We had no idea who is going to walk through that door. It was such a sweet story. So I ran over to him and we sang together. It turned into television magic. We were all moved by that. We were literally crying. We knew it would strike a mood with the public. The video got 8 million views.That’s what we work for.” 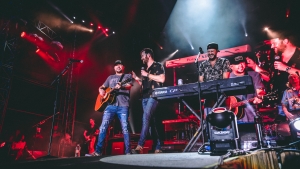 A finalist on the show from 2018 actually has a song in this week’s Top 20. Lon asked Luke about Gabby Barrett: “My vote was always with Gabby from Top 15 on. I could hear her on country radio. We tell these kids in the Top 10 that they have a platform to start their career. After Idol I was doing a stadium in Pittsburgh, and she came on stage with me. It validates the show, so we’re excited she’s doing well. We want to be a launching board.”

Luke updated us on his boys: “Til is 18 and he has decided to go to college in Georgia. We’re really excited for him. I’m sad and emotional thinking of him leaving for college. I know my wife, it’s going to be tough on her. Bo just turned 12, Tate is 9, they hate homework, love the outdoors, and they’re having a blast.”

Luke described Jon Pardi this way: “Jon is the most controlled loose canon I know. For the Super Bowl, I didn’t have anything planned. Then Jon called and said, ‘Can Summer & I come over for Super Bowl?’ Then Aldean called and asked ‘What are you doing for Super Bowl?’ So he came over too. We fired up the grill, and next thing you know, we’re throwing chairs in a bonfire. We burned up a lot of stuff, and the party went well past the Super Bowl.”