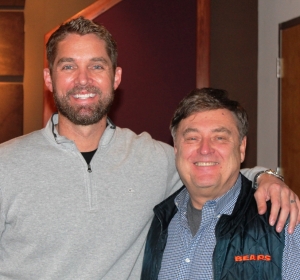 This week’s co-host is Brett Young, who is one of several country stars who recently became a parent. He tells Lon about his new baby girl Presley.

How’d you come up with the name? “I can’t take any credit. My wife loved the name. It wasn’t an Elvis reference. A friend of hers used the name, and she liked it. Then when we saw her, we realized our daughter absolutely is a Presley.”

Have you come up with nicknames? “We have so many nicknames. Press or Prez, Pea or Sweet Pea. Sweet Pea is getting the most use right now. She usually gets it when she’s crying, which is a strange time to call her sweet.”

Have their been revelations since becoming a dad? “Yeah, the most beautiful thing I’ve seen is watching how naturally motherhood came to my wife. So I just watch her. There are enough things I can’t do, such as nursing. There are some things only mom can do. So I do more dishes, or take care of trash, or diaper duty.”

Describe the first drive home: “It starts with you walking out of the hospital, and saying ‘I can’t believe they’re letting me leave with this child. The funniest memory for me was we realized we were hungry, and the baby wasn’t crying, so we drove through Taco Bell on the way home.”

There was a Ping Pong challenge at this year’s Country Radio Seminar. Brett made it to the final, and played against Scotty McCreery: “I got him in the first game, and he took two in a row after that. We were tied in the last game, and you have to win by two. He got the next point, and I was exhausted, so I hit his serve into the wall and gave him a hug. He was playing better than me, so he deserved it.”

Brett has been working on some new music. One song in particular has received attention: “One song I’ve played is a song I wrote to my daughter about my wife called ‘Lady,’ and I know it’ll be on the album. I don’t know if it will be the single or if it’ll just be released. But what I can say is there’s tons of new music, and it will be sooner rather than later.”