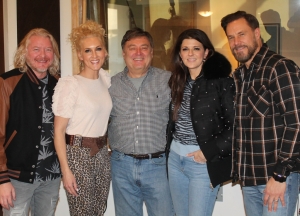 This week all four members of Little Big Town join Lon to co-host the Countdown. They introduce their new album “Nightfall.” Karen Fairchild says, “Nightfall is my favorite time of day, it’s reflective, it’s nostalgic, it’s a mood, so that sets the scene for the whole record.”

The group performed on the CMA last fall, and recalled this moment: “We were rehearsing the opening of the show with all of these women, including Reba, Dolly, Carrie, Martina, and so many more. We sang our parts, and at the end, Tanya Tucker said, ‘Well I do believe we all deserve a standing ovulation!'”

Miranda Lambert latest album includes a song inspired by the group’s Karen Fairchild. She recalls, “We don’t live far away from each other, we occasionally have back porch hangs. We were singing and drinking wine, and when I was ready to leave, she called me an Uber. I didn’t know I would be such an inspiration: ‘Too Pretty For Prison.’ She’s so good at those one-liners.”

They wanted to talk about Ingrid Andress: “We need anthems for girls, and this is one of them. This is every girl’s story. Kimberly & I got to sing this song with Ingrid on the Cracker Barrell series, and that’s when we fell in love with her. I think this song has to be from a female perspective.”

The group had a chance to appear recently with Morgan Wallen: At the CMT Awards, he & Kimberly wore matching mullets. He is single-handedly bringing back the mullet. It is an unapologetic mullet. He’s also an incredible writer. This is one of my favorite things on radio right now, This is his sexy side, not that a mullet’s not sexy. It all about confidence, how you carry your mullet.”

NEXT WEEK: Blake Shelton from Oklahoma