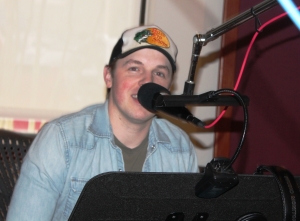 Travis Denning moved to Nashville six years ago from his native Georgia. He has done many things since arriving in Music City, as a writer and performer. But this week, Travis has his very first Top 10 song with “After A Few.”  We spoke with Travis shortly after he got the news:

“It actually came a week sooner than we expected. We’ve been watching it and a few days ago I got a text from the label and it said, ‘Welcome to the Top 10, and hopefully the first of many.’ As it turned out I was visiting my girlfriend’s family at the time, so we toasted to it, and it was just a cool moment.”

What does a Top 10 mean? “It means the same thing it meant to me when I moved here dreaming of a Top 40. When you look at that chart, and see 30 million people have heard this song.  Radio can change your life.  I have more people every day tell me they’ve heard my song on the radio. So it’s literally wild.

We’ve had listeners ask who is playing the guitar in the song? “That is me. I played the guitar solo, and some other parts as well. I’m a guitar player at heart. I started playing when I was 11 years old. I feel like it’s a huge part of me. It’s the first thing ever that clicked with me.”

This week Travis actually has TWO songs in the Top 30. Travis is a writer on the latest from Michael Ray “Her World Or Mine:” I love it! Yeah that song was written on December 1st 2016. I love it so much. There’s a killer feeling when you hear a song you wrote that someone else wanted, it’s a totally different feeling than to hear my voice. It’s a totally different feeling.  When I wrote that song, I was on my first tour, with Cole Swindell’s Down Home Tour. That was before I had a record deal.”

Travis does both songs in his show, and when he returns to the road this year, he’ll be part of Sam Hunt’s Southside Tour. “I met Sam when his career was just starting. I opened shows for him in 2014, and I saw his career explode.  I’m fired up for him and I can’t wait to hit the road with him.”

“After A Few” will be on Travis Denning’s debut EP that will be released on May 15.