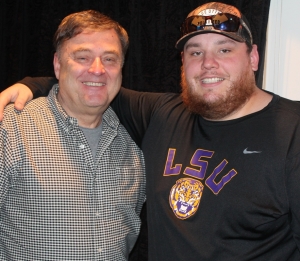 Lon’s co-host this week is Luke Combs, who was in his home studio. Luke described it this way: “We have a 2200 square foot building that we turned into a man cave. Bunch of arcade games, bunch of plaques, 84 inch television, pool table keg-erator, shuffleboard tables, all kinds of cool stuff here.”

Lon asked if Luke enjoyed the break from the road: “I’d be lying if I said I wasn’t enjoying it. We bought our house a year and a half ago, and spent 40 nights in it. So it’s been nice, planted a garden, got some chickens, hunted some turkeys, it’s been really cool. Looking forward to getting back on the road, because I miss it.

Has this affected your wedding plans? “It hasn’t as of now, but we have back-up plans in place, so we’re not worried about it.”

Luke actually has two songs in the Top 30. In addition to his song with Eric Church, he was a co-writer on “I Hope You’re Happy Now” with Carly Pearce. “That was a fun write, it was cool, I love writing for other people. It gives you an ability to write outside of your comfort zone. I think it’s gonna go, I’m wishing the best for them and for our tune.” 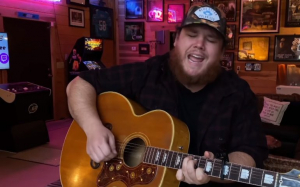 Lon asked if it’s different watching a song he wrote? “It is! I’m a lot more nervous about how it’s doing on the charts. I check up on that 50 more times than I do my own songs. So I’m just real proud of it.”

Lon asked about the line in “Does To Me” about going to the prom with the homecoming queen. “I did, that’s a true story. The girl I went to prom with, her boyfriend broke up with her the week before, so I was the stand-in, as it were.”