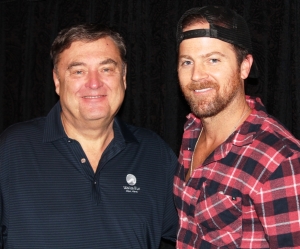 Lon’s co-host this week is Kip Moore, who has spent the past few months quarantined at his lodge in Kentucky. “The crazy thing is I was completely isolated from the world. The minute the news hit, I went straight to Kentucky. I haven’t done anything for three months until I returned to Nashville yesterday. Then I saw everyone with masks, and I missed how it’s affected everyone.”

His time there was documented in a film called “Seven Days At The Rock” that is being released in conjunction with his new album. “Something really special started happening in Kentucky, and it centered around the connection between what this record exudes is simplicity. I’ve always desired a simplistic life. I can’t wait for people to see what this documentary entails.” It’s being shown this weekend on OutdoorTV.

While in Kentucky, Kip celebrated his 40th birthday: “My birthdays will come and go without me saying anything to anyone, and that’s what happened this time. I haven’t gotten wrapped up in a number. I live so wide open, and take care of myself, and feel as good or better than when I was 20. So I don’t think about the number. I’m trying to go backward!”

What do you do every day? “I read a lot. Then I write music every day. I’m almost done with my next project. Now I’m thinking about getting a van, putting a bed and stove in it, and travel out west for the summer. I’ll sleep in the van, do climbing, do some surfing when I get out west, and that’ll be my world for the next few months.”

Kip’s current hit, “She’s Mine,” is in the Top 30. He told Lon he actually wrote the song almost ten years ago: “We tried to record it for my first album. But there’s a vibe to this album and She’s Mine just fit into the flow of this record. I’m still not married, and I don’t know what’s gonna happen. So none of the lyrics changed from then to now.”

Sam Hunt’s Southside Tour has been canceled. But Kip said this: “I’ve got a little something up my sleeve, if we’re able to pull it off, that could be special for the fans. I probably shouldn’t say anything yet, but people should have their eyes and ears open. Everything has been canceled on the concert front, but that doesn’t mean I can’t bring music to you. We’ll see what happens.”