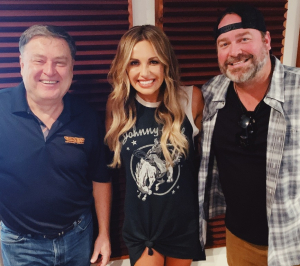 This week, Lon is joined by a first-time co-host Carly Pearce. Later they are joined by Carly’s duet partner Lee Brice. All three were socially distanced in our studio.

Carly’s husband Michael Ray is in the Top 30. Lon asks how they met. Carly recalls she saw him years before they met, and before she had a record deal. “We started playing shows together, and I started thinking about him. I felt a connection to him. Then I messaged him one night online, then we started talking, and that was it. It was a direct message. They call it ‘sliding into the DMs.'”

So they got married in October, but they’ve obviously been spending more time together lately. What has Carly learned about Michael? “I didn’t realize how extroverted he is. He’s a big Facetimer. He’s a little messy. I’m a bit more clean than him, but I’m more OCD than him.”

Carly & Michael are friends with Maren Morris and her husband Ryan Hurd. Lon asked about a night when they got all together: “All I can think about from that night is tequila. I just have so many memories of that night. They knew Michael was going to propose to me the next day in Mexico. She knew, and afterwards I was like, and they said ‘Sorry we couldn’t tell you.’ But all I can remember from that night was tequila.”

Carly has also become good friends with Kelsea Ballerini and her husband Morgan Evans: “My relationship with Kelsea runs super-deep. She will always have a special place in my heart. I was opening for her when Dibs was out. I was traveling in a 12 person van with my band. She had just moved into her first bus. So she invited me to stay on her bus for one leg of the tour. That stuck in my brain. It was so nice of her to do that. I want to do it for someone else someday.”

Carly co-wrote I Hope You’re Happy Now with Luke Combs. Why didn’t he end up on the record? Carly explains, “Luke was in the middle of setting up his second record, and I didn’t want to wait for him to be ready. I knew it was special. I knew it was Lee. I had played a lot of shows with Lee, and his voice made me cry.”

A few months ago, Carly played All For The Hall, a benefit organized by Keith Urban. “He asked me to be a part of it, and I was so nervous to meet him. So I was going to meet him at rehearsal. My manager told me that Nicole was in there with him. I walked in and Nicole comes up to me and says ‘I love your music, Carly, it’s really great,’ and she sang Every Little Thing during our rehearsal. That was such a cool moment to see Nicole sing Every Little Thing.”