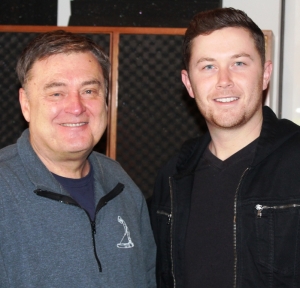 Lon’s co-host this week is Scotty McCreery, from his home in Raleigh NC. “We’re here at our home, I have a little studio in a spare bedroom, where I can work and record. I’ve used this room more since this whole this whole quarantine thing. It’s gotten my creative juices flowing. It’s been good just getting one on one time with my wife. She’ll probably say she’s ready for me to go on the road if she’s being honest!”

Besides walking their dog Moose, Scotty says he’s been playing golf: “Yeah that’s the one thing that’s remained open the whole time. They take precautions, but it gets me out. You get to be with nature, and it keeps my sanity in all that for sure.”

Before the lockdown, Scotty took part in a charity ping pong tournament with Brett Young: “That was a very fun night. It was late in the day, and some drinks had been flowing, but had it been earlier, Brett might have beaten me because he has some strong ping pong skills. He had some heat on his serve. My dad was like that. I got my chops through my pops. It was a big night, so I hope there’s a round two next year. I have to defend my title.”

Scotty was at Luke Bryan’s Crash My Playa: I’m not sure I’ve ever had that much fun in my life. Our neighbor at the hotel was Luke’s mom. We were outside enjoying the view, and we heard a knock on the door, and it was Luke’s mom. It was nice to get away, just me and my wife in Cancun, all the fans, it’s one of those things that’s done right, so I hope I’ll get invited back.”

A few weeks ago, Scotty was invited back to American Idol to recreate “We Are The World.” Scotty said, “When you get the call that Lionel Richie would like you to join him and other Idol alums in ‘We Are The World,’ I was honored and thrilled to get that call. It’s a message the world needs to hear.”

New music: “We’re still writing and recording. I’m hoping to have a new single in a few weeks. My last album was very personal, very autobiographical. This next album will be different. I’m looking to have some fun with this next album.”