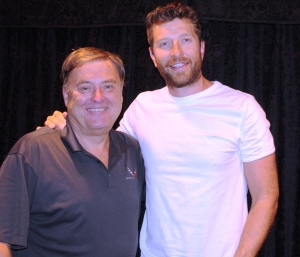 It’s been about a year since Brett Eldredge co-hosted the Countdown. In that time, he’s done some personal reflection, and he’s made a new album. He talks about both with Lon Helton this week.

Brett began by describing how he’s been living during the pandemic: “I’ve been here in Nashville with my family. I ran a half-marathon in May, raised money for Mental Heath awareness. I’ve been learning how to play piano. I’ve also watched movie and played video games, but also looked for things that were good for my mind.”

Before the lockdown, Brett did a tour of Europe: “I played an amazing tour of Europe, and that was the last of my shows. But at least it was an amazing energy, and I got to play some new music. So whenever it’s time, I know what it feels like.”

The last show Brett did was a benefit in Indianapolis for Peyton Manning: “I got this funny voicemail from him once, and we became friends. Then in February he asked me to play for his Foundation, and Dan Marino was there too. Peyton loves to get up and sing too. Even if he doesn’t hit all the notes, he eats it up. I’ve never seen anyone own a room like him.”

Brett has been working on a new album that will be released on July 10th. The title is “Sunday Drive,” and Brett told Lon he recorded the album in Chicago: “I’ve made all of my albums in Nashville. But for me, I wanted to make a record from the heart of the Midwest, where I’m from. So Chicago is the nearest and dearest city to my heart. So we found this little studio on Wicker Park. And to be able to give myself the time and space I needed, it made me be able to make a great record.”

The irony is he took all this time to make the new record, but now we’re in a pandemic: “Some people are moving their album release to a time when they can promote it, but I didn’t want to do that. For the toughest part of my life, I can remember the songs that got me through it. This album is so reflective, this is the time it was supposed to come out. I think this album can help people through a tough time.”