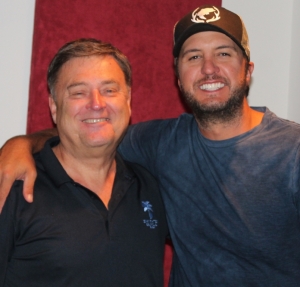 Lon’s co-host this week is Luke Bryan. This is the first of two shows featuring Luke. Lon began by asking Luke where he and his family spent the quarantine: “When the virus happened, we were quarantined at the beach. We stayed there for three weeks. It was my 18-year old nephew and four of his friends. We were going to spend spring break there. Then we came back to Nashville.”

Lon pointed out that this may be the first summer that Luke hasn’t been on the road: “With me, I’ve never been this rested. I used to do concerts, fly to LA for Idol, then fly back. You don’t realize how exhausted you are til you get a normal sleep schedule. I’ve been golfing a lot with the boys, taking them fishing, so we’ve had a good spring and summer.”

Speaking of the boys, Luke gave us an update on Bo & Tate: “My 12 year old is a mini-me. I could say, ‘Bo let’s jump in a volcano,’ and he would be ‘I’m in.’ My ten year old is more finicky, but after I twist his arm, he has a good time with it. We put in a big garden out at the house, and my nephew has been working out in the garden. I was hoeing some watermelons and cantaloupes this morning. It’s been fun watching the boys try to grow tomatoes.”

A few weeks ago, Luke wrapped up his third year as judge on American Idol. He judged the finals from the barn near his home in Nashville: “We’ve had some radio industry parties in that barn. But when you look at building the infrastructure to get all of us to be able to communicate, and they all live in the city, while I live in the country. It was an undertaking to make that happen. It was remarkable.

The finals were all held in the contestants’ homes: “I’m really heartbroken they didn’t get the Hollywood experience. But I think America embraced it and enjoyed it. I think they got it right. When you look at the story of Just Sam, a girl from Harlem who lived with her grandmother, it was so great to see America rally behind her. I think we’re gonna see some special kids come out of this batch.”

Luke talked about some of the fun zoom calls he’s been doing with fans and radio stations: “When we realized that touring was gonna shut down, we’ve had the opportunity to do zoom calls with fans and radio. You forget how therapeutic it is being around your buddies. Just seeing their faces brings you joy during this time.”